28 breweries in one day walking around Portland. Is that a record?

I drank at 28 breweries in one day walking around Portland with a friend of mine, it was pretty epic.

Seems like that’s gotta be a record, but I’d love to hear about similar missions that any of you have had. I also once went to 61 breweries in a day (also Portland, OR), but that was with the help of several drivers throughout the day. And my friend went to 77 once, but also with the help of drivers.

Even one brewery in a day is a good day, but more is usually better. Cheers!

In Gurgaon, in the subrurbs of Delhi you have pretty much 28 brewpubs in one square, and quite a few more on walking distance from it.
As far as quality goes, I’d prefer doing it in Portland for sure…

Awesome! What was your favorite?

I really liked Breakside, but that particular day Great Notion hit the spot. Had 4 or 5 big stouts while we were there.

In Gurgaon, in the subrurbs of Delhi you have pretty much 28 brewpubs in one square, and quite a few more on walking distance from it.
As far as quality goes, I’d prefer doing it in Portland for sure…

Shit I didn’t know it was that packed with breweries or I’d have made my way down there when I was in Delhi a couple of years back.

I did a brewery tour walk in Portland a couple of years back and basically died, but I was trying to hit almost everything on tap everywhere I went in flights–since I was visiting and hadn’t been there before, basically every beer was a tick. And then some places only poured full pints, which did me in, even despite not finishing many of them. I think I probably only managed seven or eight brewpubs, including a beer bar, Apex.

I was updating that shit some months (or years?) ago… it’s wild 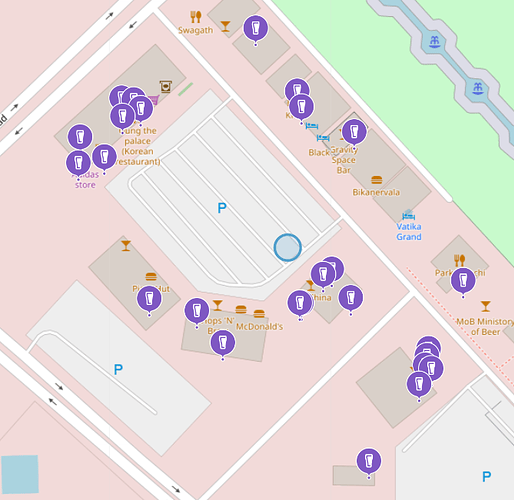 Portland is definitely still the per capita beer/cider destination. Downtown AVL from a quick glance, it looks like 19 breweries/cideries are walkable(within a square mile-ish). Everywhere else is doable, but way more spread out. Very impressed if you walked all the way to WAVL for the rest. I’d probably max out at 5-6 stops before needing a nap.

What area of Portland is best for walking around a bunch of these spots? I may be there for a day next May. I suppose I could just watch video looking at our map didn’t scream where to hit up.

The NW is pretty dense. Really, though, there are several dense spots. I would look for the one or five breweries you’ve been hearing about and look up where they’re at. Unless you’re trying to go on a big mission like this, you could easily be walking distance to 4 or 5 breweries which is probably enough for an average good beer day.

I paid for the bike share so I could rip around a little easier, though I was too drunk to take a bike after a few brewpubs. If you start somewhere like Baerlic and just go north towards Cascade etc that would be like 5-6 at least without too much walking. Or there’s a cluster the other side of the river around Von Ebert/ Deschutes etc. that are pretty walkable. Also, when I was there last year, they still had a 10pm curfew in effect for covid so didn’t get to hit some places, and others like Hair of the dog were closed completely during thick of the pandemic.

Hit me up! I’ll show you around.

I forgot I posted this thread awhile ago

“A man from Wales has officially broken the Guinness World Record for “most pubs visited in 24 hours” — but don’t expect to find footage of him drunkenly stumbling into his final stop. Despite visiting 56 different pubs to achieve this feat, he only drank two pints worth of beer across his entire crawl.” some serious place rate ticking here

So looks like you could have world record if you’d had set up officials.

I’ll be meeting a couple ratebeerians in Portland Maine in 2 weeks, I’m sure we will do some damage but not at these crazy levels since we have style ticking bottle share to get to.

At this point in life, I’m happy if I could find one brewery in a city that makes the kind of beer I like.