Any recommendations for beer advent calendars (shipping to Europe)? I know of Mikkeller, Brewdog and To öl.

Do any of the UK ones ship to EU or is that Brexit’d to?

Most of them I think. But who knows how brexit will affect things.

I took the brexit risk and got an EFP one from Brewdog. Let’s see how that works out…

I took the brexit risk and got an EFP one from Brewdog. Let’s see how that works out…

Are you saying this Brexit thing is real?

As far as I can tell, Hop Burns & Black already stopped shipping outside of the UK…

Could this be interesting? https://www.beyondbeer.de/en/beer-packages/craft-beer-advent-calendar

I checked the list and some beer is just meh, but there are a couple of very good ones like the It’s been a while from Berliner Berg and the Stout from Simian Ales.

(or if you want a customized Advent Calendar from Germany, let me know

This is vaguely tempting as I bought the Kalea one two years ago. However it’s about £20 more and has two beers I’ve rated. I know they deliver to the UK as I ordered some US beers a few weeks ago.

But… why would you want an advent calendar with known contents?

Cannot check if this is sent to EU as well (browsing with US IP atm): 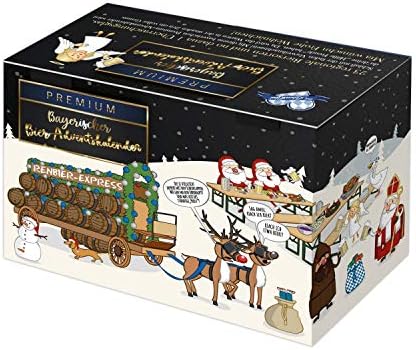 You are right. But maybe it’s better to know before what you are paying for. Could you imagine a 24er box with 15 beers you already had or crappy beers?

That’s why I’m going to Beers of Europe with my wife. Then she will wrap and number them. All new ticks for me that way. She bought me two calendars last year and there was still few beers in each that I had tried.

I’d rather have spoilers than beers I’ve ticked.

As I can’t decide which calendar to get I’m going to order some beers from Mikkeller (mainly some Finnish ones they currently have in stock) and Hoptimism and then just draw them randomly from a box.

I’d rather have spoilers than beers I’ve ticked.

For me quality of an advent calendar is important, but I don’t care that much about ticks really. The fun part of an advent for me is the unknown/surprise. If I knew what was in a calendar I’d rather just buy a crate of beer and a choose on a whim which to drink from my stash, just like I normally do.

(They don’t say which beers there are inside, but I know there is at least one from Spezial, Bamberg)

I just think it’s a huge rip-off when those German advent calendars sell for almost as much as a craft calendar. I highly doubt any of the beers in there retail for much more than a Euro, so charging 70€ for 24 beers is rather dreist.

There really isn’t a good translation for “dreist” in english, is there, it’s just one of those words. “cheeky” kinda works, but is not strong enough in my opinion.

EDIT: The other one you linked is 80€, totally ridiculous. But at least that has some craft beers in it that probably retail for 2-3€.

I need to move to Köln, then. I can tell you here Franconian beer cost more than one euro. in some places even 2 or more. And abroad a bottle can cost from 3,50 and more. So it all depends on your needs.

There’s a large Getränkemarkt in Bonn that is well-known for their Franconian selection and fair prices and none of those beers are much more than a Euro, maybe 1,25 on average, but probaly less. I would assume they are a little cheaper still in Franconia.

So yeah, if places are charging 2€ or more for Franconian beers that’s just a huge rip-off.

There’s a large Getränkemarkt in Bonn that is well-known for their Franconian selection and fair prices and none of those beers are much more than a Euro, maybe 1,25 on average, but probaly less. I would assume they are a little cheaper still in Franconia.

I was thinking of the same place. I remember buying half-litre bottles of Weizenbock for 85 Cen there. Unbeatable.