Time for another Poll / Discussion

So without looking(yet) Do you think

The Quality of the Beer you are drinking

Id Suggest at least First , last and a middle year if you dont want to look at them all

Having look has your average score

What i find interesting, is that Its not just my Scores increasing but the average of whats being drunk, so im reading that as im finding more beer that i and others really enjoy as the amount out theres has exploded. Meaning theres far less rating crap beer for the sake of a tick.

Can’t really answer the second poll because there’s no option for “it varies”. My average ratings given per year are all within 0.07 of one another while the average rating reviewed number has a range of 0.13.

Without looking, I think the overall quality of beers has improved. But I adjust my scores to my expectations a bit. Where 10 years ago, I would accept some minor (or even major) flaws in Dutch beers, nowadays I do not anymore and this will reflect in my scores.

So I was a little higher of rater my first 2 years as just discovering this world. I’ve always rated a bit higher than average but i’ve got a little more stingy. Given is my rating and rated is website average and v+ is the variance of my nice attitude 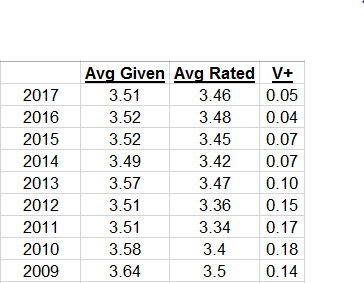 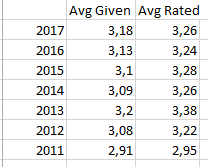 Summary of each year? Do I find that on the other RB site?

I will say I used to rate much higher before I developed a better palate. I doubt the quality has gone down (for the most part) but rather I know what to look for. Keeping homering at a minimum has also helped.

My ratings haven’t fluctuated all that much, but the average score has gone up.nice to see that I’ve gone from ‘ridiculously high rater’ to ‘rater on the slightly high side’.

Just wondering if the ‘average RB score’ includes all beers? I used to drink more beers with fewer overall rates, and these beers will be dragged down by the Bayesian mean.

Not too sure what I am seeing here to be honest. Am I drinking better beers, am I scoring higher than years ago, or is everyone scoring higher across the board?

I tend to drink all styles and types of beer, crappy pale lagers to Imp anythings, so my average scores will always be ‘mid-table’ because of the range of beers I drink. I do however rarely score anything over 4.

Well, for the first couple hundred rates (or even more), you’re still calibrating on what’s out there. And you’ll also go for the easily available good stuff, of which there is plenty. I think those two effects are enough to make a first year blow up in rating given.

So I clicked that I think it has declined because I know becoming a hardcore ticker is removing a certain bias we’ve had (and because of the “first year everything is amazing” effect). The beer I drink has certainly improved.

The average score of the beer I’ve rated has risen steadily with two spikes.

2013 … dropped to 3.36. This was because I went tick frenzy and rated a lot of stuff so the general quality declined a touch.

I didn’t tick for the sake of ticking quite so much last year.

Many a time I’d pop to a bar and have a solid 3.7/3.8 rated beer I’d had before where as in previous years I might have gone for a boring bitter or golde that was likely a 2.9 but a new rate.

I’m remarkably level, just a slight step down since 2014, which could be due to one or both of:
a) I started travelling more to countries less well known for good beer, and hit the supermarkets with gay abandon;
b) Kraft beer concoctions started hitting the market.

A couple notes: Many of my very few 2012 ratings have been rerated accordingly. And in 2015 I went to my first beer festival, Great Taste of the Midwest, and my numbers have climbed steadily since. Between 2012 and 2015, I have 262 ratings. Last year’s dip came from trying styles I had been avoiding, getting my hands on really whatever I could get. I was far more selective in my first few years on the site.

Only been here since 2015 so not much data to go on. My average rating goes way up but there’s an easy explanation for this in my case:
I started out my beer journey by drinking all the crappy macro lagers, bitters, etc. stocked in my local supermarkets. Having become bored of mainstay styles in the UK (lagers, bitters, goldens) I’d say that now pretty much 90% of beer I seek out is decent craft beer from breweries I’m fond of or styles I prefer. I kind of avoid typically low rated stuff, I don’t care about the numbers any more, just the quality of the beer I drink (for my tastes).

So in my case it’s impossible to say if the quality of beer is improving, although I think it is. But I definitely have become far more selective in what I choose to drink, despite a big increase in average daily rates.

Fun stat. Looks like my quality went up significantly to 2014, then started dropping. I think that correlates to when I started seeking state, country, and style ticks, rather than just drinking good beer. Interestingly, the difference between my score and the average inverted about that time. 2015 was the first year I had that I gave higher scores than the average, and it’s followed that trend since. Interestingly, though, my scores have lined up with the average much better the longer I’ve ticked. 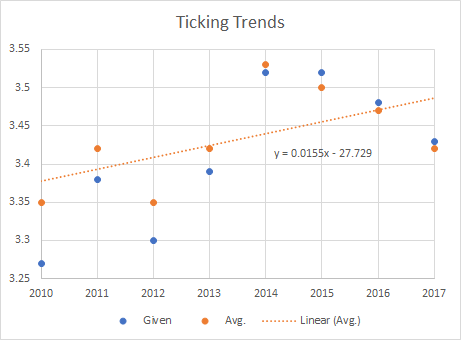 My ratings have certainly climbed up, but that is also commensurate with my moving to New York, where I have access to better quality beer: 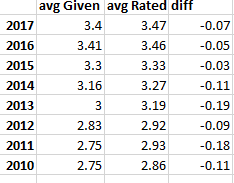 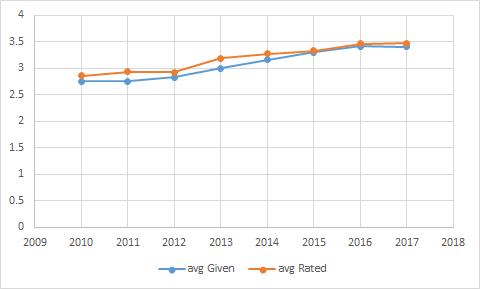