The only gift I usually ask for these days for Christmas is a beer advent calendar or 2. Who’s getting one this year and who are you going with?

Ideally I would go with a Kalea one as it was 24 ticks for a decent price. There’s a French one this year. But of course they no longer sell them in the UK.

I would probably go for the Hoptimism one in terms of quality. Although did anyone get a Beerwulf one last year - yes they are macro scum but thought it may have some different beers in it.

This one on Amazon has beers from random NE and Scottish brewries which would all be ticks for me: 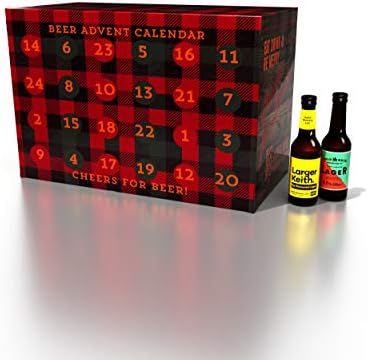 Make my own, cheaper and more fun (giving the bottles to the wife for her to place where ever); knew they’d all be good beers too.

Last year the wife got me Beerhawk and Ghost Whale. Not sure which way to go this year.

Always tempted by the Ghost Whale and Hop Burns & Black versions but it’s a lot for me to spend on beer in one go, so have never gone for it.

What was in the Ghost Whale one? I’d hate to have one I’d already ticked:)

I went for the Hoptimism one last year it was really good. I think I posted the beers on last years thread.

I think I will order from Hoptimism again this year.

I posted them on the thread last year you started.

It was good for me since I hadn’t been in England long.

I was just reading that thread. Hoptimism looks the best. If I don’t go DIY.

I’ve been thing them as well since I didn’t do theirs last year. Course my wife did suggest we take drive up to Beers of Europe pick 24 beers I’ve never tried and she will put it together for me. She did it a few years ago all by her self, but had some help from my friends.

@SHIG, an hour or so in ‘Beers of Europe’ is a great way to choose an Advent Calendar, I love going around there.

Trouble is the wife starts putting Port and Spirits in the trolley, so the final bill is ‘very heavy’.

I’ve bought the advent calendar from BeerBods for the last 4 years & I think it’s tremendous.
Not big strong stuff but always a few Christmas beers & stuff I’ve not had.
I’ve tried others in that time including the BeerWulf last last year but BeerBods is my choice again this year - although it’s not been announced yet & they were took over by Beer Hawk a few months ago - with all my crowdfunding money down the drain…

Ive been interested in one of these but not really a thing in US except at Costco but Im not a member of that. I wonder if one will be available in DutyFree at Manchester or Belfast airports when Im there in November. would love 24 surprise UK brews

I would say that is guaranteed not to be the case.

Surely you know someone who is a member of Costco. It’s like that Seven Degrees of Kevin Bacon game. I’ve never bothered joining because my parents and half the office are members.

Beerwulf one is £50. Exclusive Jopen beer.

@Jow; I am in the US over Christmas and New Year, my daughter has bought me the Costco one.

Do you know if their Advent Calendars are all the same or will the one in Southern California be different to one in New York?

I’ve never step foot in a Costco however from what I reckon it’s just the one and it’s all German brews.

I could possibly look for one while I’m in Belfast however not sure I’ve room in luggage to bring back. Or shig can bring me one when he visits florida

Thanks for the ‘heads up’ @Jow. I just hope the German beers are new to me, or at least some of them.
As for getting one in Belfast, it would be possible, but it’s a lot of beers to transport: I would just buy some interesting beers if you can and make your own up once back in the US with whatever you’ve got.

The only issue is the element of surprise would be tricky unless I’m blackout drunk when I go shopping. Also that would probably put my luggage over weight limit and my work wouldn’t be keen on paying for that.

If you go on the Kalea website there are details of the 6 or so they do. There is one Costco version. They also print what the beers are so you can check.