It’s marketed as not being an Irish Stout.

Which doesn’t preclude it being a dry stout.

I asked the brewery about when they boosted the ABV, their reply was that it has always been 8%, except previously they used a formula to calculate the ABV, but now they use a device (hydrometer?).

From the same brewery, this beer

was renamed The Machine IPA at some point this year. ABV is 6.9% now.

I confirmed with the brewery that it’s just a rebrand/relabel. 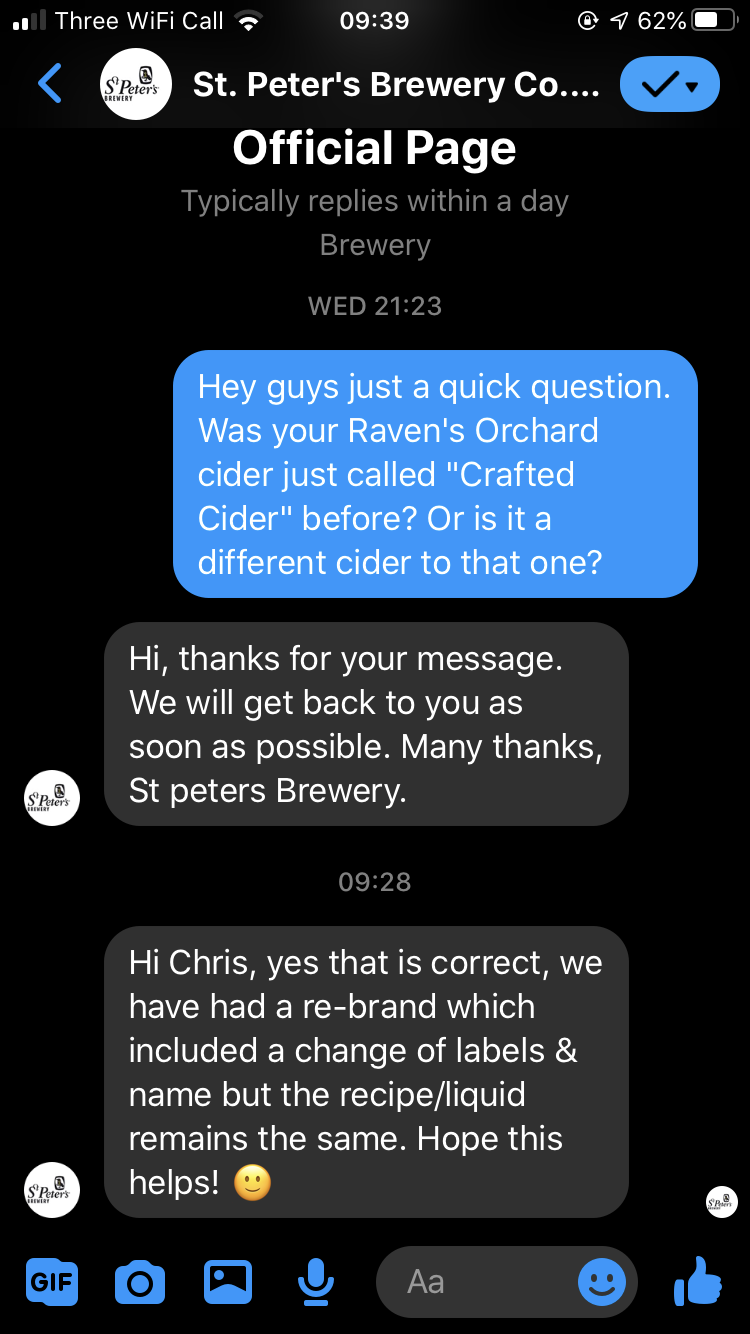 Also the beer in my previous post still needs modifying:

https://www.ratebeer.com/beer/amundsen-pimp-dust/818529/ Remove the line “Label on can says: Blueberry Muffin Pastry Stout” from the description because 1. it isn’t a stout and it doesn’t call itself a stout, and 2. the first line already describes what it is and what it actually says on the label. Also remove the tag pastry stout because again, a pastry sour and a pastry stout are completely different things.

I find it hard to believe that this non-alcoholic “cider” is brewed in China:

Are these even rateable? I remember that the full-strength Ikea perry was removed:

I was wondering why this Perry has been made unrateable: https://www.ratebeer.com/beer/ikea-food-ekologisk-kolsyrad-parondryck/150947/328256/ Looks totally legitimate as a Perry with 4.5% abv, maybe someone has some additional information? Would be good to display that within the commercial description.

I think based on that, these two should probably be removed too… they don’t look too natural. 7.1% fruit content in both, from what I can find on the internet:

For the main part not handling admin duties any longer, so leaving this to ohmper

Fixed the Amundsen pastry sour and the cider alias.

(The next three actually have the spirit added to them, it’s not just barrel aging.)

This is only one of 20 or so beers that should be Pale Ales according to the new definition:

Pale Ale - Rye (or APA as there is no mention of rye in the description?!):

Here with a have a duplicate. The colab is the original (most of the beers are retired because the brewery was erroneously retired):

This should be called The Way is Shut:

This is a duplicate:
https://www.ratebeer.com/beer/wandering-brewer-wayfarer-green-hopped-pale-ale/773438/

N/A perry from IKEA? That is likely pure pear juice, only without pears.
If I may have my say I’ll nuke those.

Don’t think this has chocolate in it. Just a stout made to taste like chocolate.

Not convinced a hint of vanilla doesn’t just mean taste either.

Put this as dark sour.

I wonder how the bartender feels about this picture being on the site.

I think the new one contains coconut and the old one doesn’t? So should be separate?

Description does not indicate that?

Following up on a post I made a couple of weeks ago.

Situation here is this beer has been renamed for very obvious reasons. You’ll notice the only ratings so far are from Norwegians… according to Polly’s, due to contractual obligations they had to send a lot of cases for Vinmonopolet there before they could relabel all the beers. I don’t think it got released in the UK and other markets under this label.

Previously known as Bring Back the Fever, we’ve relabelled this beer owing to the overwhelming responses we got when we asked your opinion and you responded. Same beer, same artwork, different name; please welcome No Track Info.

As explained by our favourite entry from our scores and scores of suggestions, the phrase No Track Info very much draws nostalgic memories of yesteryear, which our beers unashamedly embrace; with our fondness for maintaining an element of old school in our beers well noted.

This beer in turn embraces some seriously old school pine vibes, whilst simultaneously bouncing with candied melon, clementine, and juicy mango new school hop notes. An all out smasher of an IPA.

The new beer is now created https://www.ratebeer.com/beer/polly-s-brew-no-track-info/827606/
If an admin could include the quoted description above to explain what’s going on here.

Then move the ratings from the old one https://www.ratebeer.com/beer/polly-s-brew-bring-back-the-fever/823012/ and alias.

Regarding the last one, the other higher ABV version of it is down as a Gruit. Of course that could be the one with the style however if they’re brewing a Magna Carta themed beer the a Gruit would make sense. Down as a Barley Wine on Untappd.

https://www.ratebeer.com/beer/owl-boobook/828661/
Just added this one and realised I’m an idiot. “Brewed at” should be Bereta Brewing Co.

This third owl marks a new different beer. This time it is a Black IPA, resulted from a rich blend of 9 malts and 3 hops (Centennial, Amarillo and Cascade).
The Americas is common ground for the hops and this owl. And this is not the only one. Dark brown colors, born in late winter, are among others.

Another metric buttload of beers that appear to be in the wrong style.

Was tempted to highlight every ESB with IPA in its name as an IPA - English but resisted.

Duplicate - should presumably be Winters Tail. I googled the first one and it didn’t produce a result:

Typo in the name to correct please… cider, not cide!

It looks like this one is retired. No trace of it on UnTappd or the internet. And it was probably entered wrong in the first place as “Pivovskoe” doesn’t actually mean anything:

https://www.ratebeer.com/beer/nashe-moskovskoe/38714/ (no ratings since 2004, not on UnTappd at all and not listed on the brewery website)

https://www.ratebeer.com/beer/nashe-bezalkogolnoe/367117/ (no ratings here since 2015, nothing on UnTappd since 2017, also not listed on the brewery website)