Doing a Birmingham crawl on this day … not given it too much thought but the usual venues will feature.

Was going to sign up for this and then remembered that it’s the boy’s birthday.

If it was Birmingham, Alabama I might have been able to come.

Oh I can make this one

I can do that. All on me route card

You may be interested in a couple of new places just opened in Brum. The new Sommar Tap and also Vagabond, a self service bar.

Cheers … Aware of sommar … a new brewery still as timed out on their original tap back in June … will definitely pop in there.

Whats the deal with Vagabond?

When I lived in Windsor back in 2015/16 a restaurant opened in Eton with 8 keg taps … seem to recall you purchased some kind of in house credit card at the bar and then sorted your own beers and the machine took units of credit off depending on the beer and the pour size!

It never seemed to catch on did it ?

Maybe… but I also might book flights between now and then, it is 3 weeks away after all

Yeah… pretty much those, Tap lists depending … certainly dig Brew and Halton as never been and will throw up plenty of rates … uber the other side for Burning soul and back into town past wolf … sommar Brew Tap as another new brewery for a few.

Wish I could join! Enjoy fellas!

When I lived in Windsor back in 2015/16 a restaurant opened in Eton with 8 keg taps … seem to recall you purchased some kind of in house credit card at the bar and then sorted your own beers and the machine took units of credit off depending on the beer and the pour size!

It never seemed to catch on did it ?

Pretty much the same. There was one in Leamington that didn’t catch on either. We go to a similar one in Lille, which is really good and works well. The Leamington one didn’t have the technology to cope where the Lille version is pretty faultless, maybe that is the major difference.

About 10 years ago they had one in Brugge. You basically bought a card and charged it up with credit and then you could pour whatever you wanted from about 30 taps of Belgian beer. I remember one Christmas I was there and had a great time pouring small measures of boozy Belgian Christmas beers. It was only there for a year or so unfortunately.

done a self-serve bar in Budapest, great for ticking I thought… til I saw the prices were so high that serving myself 100ml there was no cheaper than buying a 0.2/0.3l in ‘normal’ craft bars so it would be no more expensive to go to the usual suspects and leave half of each glass

In UK in theory self-serve would still have to be in 1/3 or 1/2 or multiples thereof, so not sure how they get round that. If the smallest measure is a third, again what advantage does it offer over a normal bar?

I seem to have a memory of a mobile taproom (with self service) parked up in the cark park at Beavertown one sunny Saturday maybe 7/8 years ago.

It was some sort of mini event at Beavertown and the van had guest beers loaded onto it and seem to recall the bloke who owned it/operated it was brought in and did this as a regular event thing.

Just read about a self-service micropub in Lyme Regis. Although rather than relying on software they rely on trust. Apparently you get given a ‘clicker’ (presumably those things my Dad the transport engineer used to have in the house for counting traffic) and click it when you serve yourself a beer. You the pay up when you leave based on the number of beers the clicker has recorded. They obviously have a higher belief in humanity than I do. 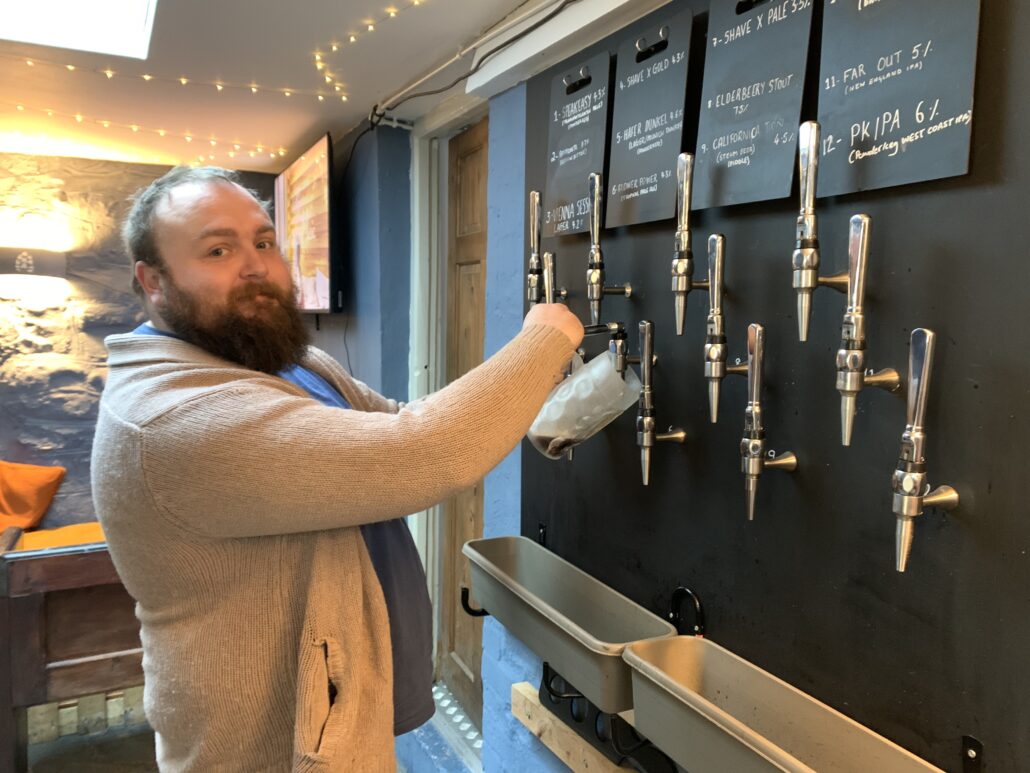 A warm welcome awaits at the Shave Cross Cellar - LymeOnline

WITH colder weather drawing in, the cosy Shave Cross Cellar has quickly become a favourite haunt for Lyme Regis residents since opening six weeks ago.

pah … was in Lyme Regis back in September .

There a self service bar in Nottingham. I think it’s the imaginatively named Nottingham Tap. You get a card as you walk in. Pour as much or as little of a beer as you like and pay as you leave.