I guess it’s a regional thing but I think I’ve only ever seen one of their beers when Hogs Back Shop had Pale Rider.

It was on my list to visit when I was in Sheffield last year and well I didn’t.

I think these are the same beers guys:

Sorry about the delay in response. This is the first time I have been able to log-on to the forums in 3 weeks!!! The Scottish highlands are notoroius for inconsistencies in addresses. Mostly due to whoever adds them and which admin verifies them (neither of which is usually me). Obviously historical boundary changes are a big factor. I have changed what you have requested. Wooha is an odd one as although they have been in administration for some time their website is still live and they are still selling beer. Will keep an eye on them.

Good luck at adopting new regions with @services gone. Unless @joet or @marko has a way. Plus what day you @Scopey?

Don’t need to change anything major, other than add them in the address bar and aim to be conistant where possible.

[quote=“SHIG, post:1724, topic:553, full:true”]
Fixed Wild Barn address (which was almost impossible On ferry wifi) and Wooha. What other changes are actionable under current regional landscape?
[/quote] I have sorted this SHIG. I’m still not 100% sure on wooha as they seem to still be selling beer.

This beer https://www.ratebeer.com/beer/green-duck-quackcurrant-and-liquorice-stout/320171/ is currently 5%. Since there is no picture I can’t confirm if it was ever 5.2% or not. Strangely, when I previously drank the beer in February 2020 (but didn’t post a rating), I listed it as 4.4% ?!

beers brewed by smaller brewers and especially on cask regularly bounce about about by 0.1 to 0.5% … could be back to 5.2% in 3 months time … really not worth the time worrying over or fixing 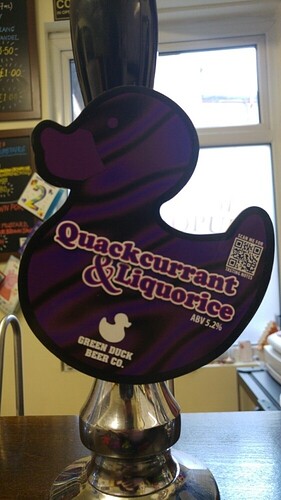 took me 30 seconds to find that

but as I said … what does it really matter ?

It’s a minimal change that can go up and down … same beer.

If there’s a substantial change to the beer in recipe or ABV (typically 15% difference) then it will likely warrant a new entry.

Got a report from Trolleo, what with him living in Manchester and all, that the Cloudwater brewery entry was effed up a fair bit, so cleared it up, so it’s obvious what’s what.

Also, added the Cloudwater Barrel Store taproom entry and moved out ratings that were very clearly about it → you should be able to rate it if you haven’t (having rated the brewery entry while the taproom was there before March 2017 or whatever):
https://www.ratebeer.com/p/cloudwater-barrel-store-taproom/100129/

Has a brewery been relocated from South Yorkshire recently?

Lost my South Yorkshire region ticks recently and am trying to work out what they were.

Edit: nevermind, it looks like someone moved a collab beer previously listed as being brewed by Abbeydale in South Yorkshire to Barcelona.

Honest Brew into admin. On Twitter a lot of people expressing surprise that a big player coupd go down the pan…but was that past glories? Haven’t used them for about 5 years.

(Although when was the last time they released any of their own branded beers so always susowcted that their brewery listing should have been retired a while back?)

Can someone rename the old place (to “That Beer Place (Market)” ?) to avoid confusion.

Also I posted an amended review of the old place but it didn’t move my review to the top like I was expecting ?