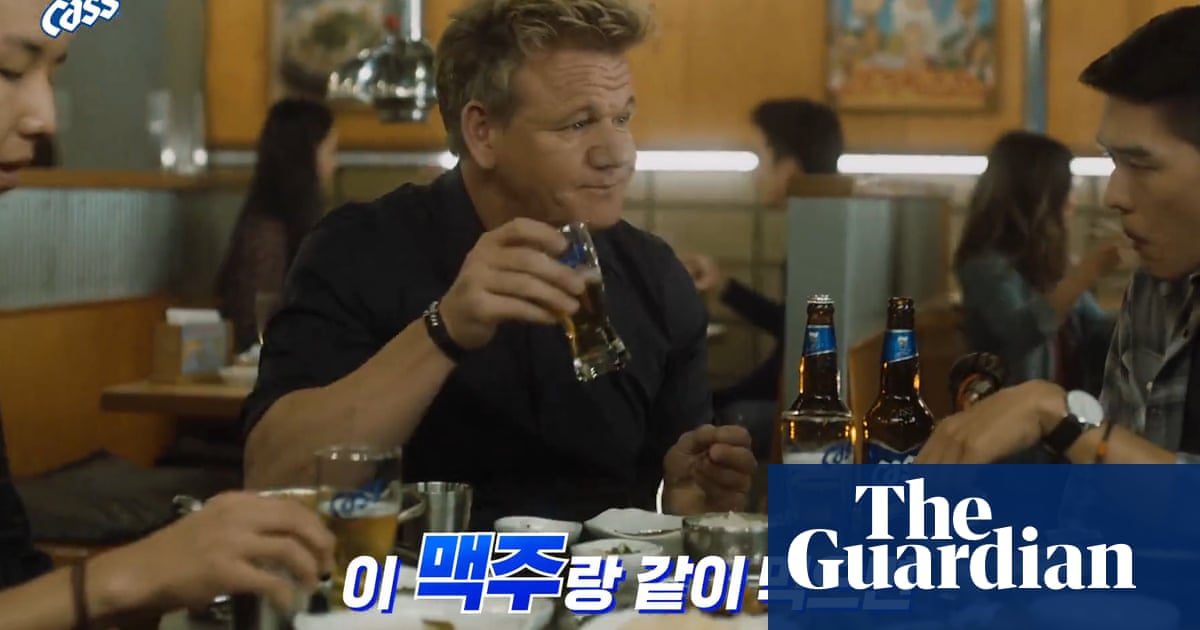 ‘Bloody fresh,’ said the chef as he downed a glass of Cass, but critics say he is endorsing ‘maybe the worst beer in the world’

“a celebrity chef like him, at this point in his career, traffics as much in his trustworthiness as an evaluator of taste as his ability to cook”

If we take that to be true, as it seems believable, we’re lead too an interesting logical conclusion. Now we know for a fact that he’s an absolutely untrustworthy evaluator of taste (he’ll say anything for money), then we should conclude he’s probably lacking in the ability-to-cook department too.

He’s not always too bright on the financial front either. He bought the Warrington, a rather splendid Victorian gin palace pub near me for something over £5 million. Then it was closed for many months, thus earning no revenue, while he spent goodness knows how much on refurbishing the upstairs restaurant, Five years after buying the place he sold it for less than he paid for it in the first place. Given the London property market that’s a pretty impressive achievement!

One of my friends went to his restaurant in Las Vegas. Apparently it was filthy and the food was cold. Could do with being on his TV show.

With Mich starts, serving fried moss at one of his restaurants, is endorsing a Swedish pale macro lager in ads everywhere.

Some ppl will do most anything for money, doesn’t matter if they believe in it or not.

"Björn Frantzén is counted among the worlds top 50 chefs, currently holding the number 31 spot in The World’s 50 Best Restaurants 2015 list. "

The beer, Mariestads Export:
https://www.ratebeer.com/beer/mariestads-export/10057/
got a numbing “8” overall as of ratebeer, with an average of 2.36.

word spread out about pre-GBBF satanic gatherings in the neighborhood…

I enjoy Gordon Ramsay a lot, and watch Hell’s Kitchen and Master Chef religiously. However, he doesn;t know beer from his ass. I recall an episode where he took a player into Harpoon and was talking like it was the best beer in the world. For a guy with such a supposed master palate, he doesn’t know beer.

“You disappoint me Ramsay.”

I love what he implies with saying

“I have fallen in love with Korean food, and it doesn’t need to have an over-sophisticated, slightly unique beer that costs a fortune,” he told reporters in Seoul, according to the Korea Herald.

Ramsay said he was far from embarrassed by the ad, and declared that Cass was the “the beer of the people” – unpretentious, affordable and the perfect antidote to the spicy, pungent flavours of Korean food.

“[Cass is] something I drank before the call [for the endorsement] came in,” he added, according to the JoongAng Daily. “When I have Korean food, I don’t look for a wine list with the most expensive beer to go with it. I want a beer that’s easy, fresh, and something I can drink without having to show off. I think that was the important thing.”

So anything other than cold, pale lager is: pretentious, “slightly unique” (so: not really), too expensive and, just in general, for show-offs.

Tony Bourdain, who is > Ramsay if you ask me, sometimes also paints craft as something sort of comlicated, linking it to fads. See his last AMA for example:

Oh, I’m also no big fan of the judgmental barista and beer nerds. I mean, I like a good craft, but don’t make me feel bad about my beer choices. You know what kind of beer I like? I like cold beer.

Like the other chefs here, he’s brand ambassador as well. But for Balvenie. Better choice.