Just rated a Leatherbritches beer and decided to delve a little deeper as I know Ashby DLZ is very borderline twixt Leics and Derbys.

Seems the brewery has moved a few times over the years.

They clearly state Leicestershire on their website, on RB we have it listed as Derbyshire.

If you google Leicestershire county then zoom in the county line vanishes on the final zoom before the level that would make certain which county the brewery is in.

Anyone have any local knowledge?

No local knowledge but there’s a website that can overlay UK county boundaries over its embedded google maps. Though it appears to be just inside Leicestershire when zoomed out, weirdly enough when you zoom in fully (linked below), you can see the brewery is situated quite literally just a few metres inside Derbyshire’s boundary.
County Lines – shown on Google Maps

However, given the brewery’s postal address has a LE postcode and the brewery themselves say Leicestershire, should we not just stick it in Leicestershire? Seems very nitpicky to put it in Derbyshire just because of this, no?

I’ve looked at this before & I’m quite certain they are juuuuust outside the Leics border, and in Derbyshire. Unless their postcode/address is wrong.

Then again if they say they are in Leicestershire I assume they’s know best. I’ve never asked them, maybe I should.

For what it’s worth I’ve always considered them a Derbyshire brewery.

Incidentally if you ever want to know the county for a postcode, wikishire’s data lookup has so far has proved to be accurate for me: Wikishire

I’ve also looked at this before as I was hoping to get my rates moved to Leicestershire! But it is situated just inside Derbyshire. The postcode attaches to the Derbyshire village of Smisby.

Derbyshire - I’ve looked at this before

I saw this and knew we had gone through this one before. Literally, on the wrong side of the fork there or right side depending on where you want the rates.

Well … it’s fairly obvious I suppose ! Who wouldn’t want to be associated with the mighty Foxes instead of the sheep shaggers ?!?

As any footballer ground hopper will tell you, post codes are purely for the benefit of the local posties - they do not respect county boundaries and are based on sorting offices.

They have a Leicestershire address based on the post code so presumably just go with that.

Google maps is the highways engineer equivalent of garlic to a vampire as far my Dad is concerned. He swears by Streetmap which shows that they are in above the black dotted line so in Derbyshire: 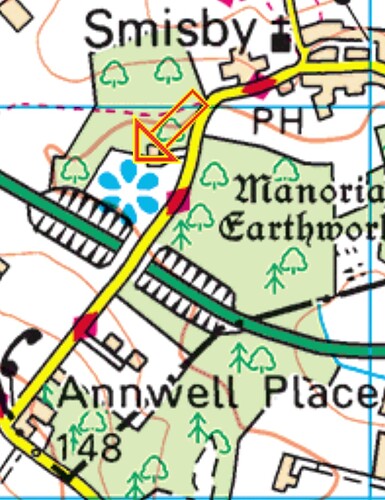 You are very artistic when drawing maps.

Royal Air Force Cosford (which incorporates the Defence Collage of Aeronautical Engineering) is in the Shropshire village of Albrighton, but both have a WV (Woverhampton) post code.

Been to the brewery just after they moved in 2011, some sort of presentation if I remember. We had this conversation at the time. The border goes down the east side of the road going past the entrance to the Arboretum, so the road maintenance is down to Derbyshire.

Fully aware postcodes dont link up with county lines … just thought this one to be the closest of calls allied to the brewer calling Leicestershire and some close zooms required on the maps.

I remember Loddon being a close call too.

I am sure that the local Derbyshire CAMRA branch will be fiercely defending it as one of their own regardless of the postcode and address details on the website which lets face it is purely to mitigate against delivery issues.