Does anyone who works for ZX Ventures actively use the site to rate beers?

The former owner of Ratebeer?

Is it at all possible we can hear something from ZX here on the forum?>
Their intentions etc?

How much beer do you gotta rate to be considered “actively rating”?

So, Ratebeer in cca early 2002 with a (much) more fancy front-end? The fact that they are trying to profit from these news makes me scroll past them.

Is it at all possible we can hear something from ZX here on the forum?>
Their intentions etc?

Have questions about RateBeer, the team, our direction, the investment, what Joe’s doing, how RateBeer Best changed, the mobile app, or anything else? The Australia team is waking up bright and early (powered by coffee

) and joining me for a live Question & Answer on Thursday, 14 February from 3 - 4 pm Eastern/8 - 9 pm London. You can post your questions here and we’ll address the best live. [image] Thanks! Joe

Cheers. One on the buttons on my phone has broken so cannot take screen captures!

So the site is broken since a few hours. ZX joined in about one and a half year ago and it seems RB still can’t afford a proper test environment and is still messing around in live environment instead. What was this investment for again? 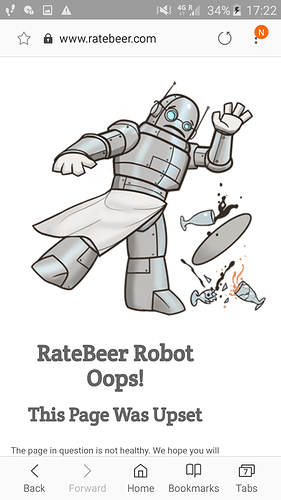 I have an hour and a half downtime in an airport lounge.

Time to catch up on some ratings … clearly my fault as pretty much every time i get a chance to catch up the robot pops out !

Yep, been like this since 10:00 CET. Half way through a tasting as well, back to taking notes.

Well it’s 3 AM in Australia, Ratebeer team is still asleep.

It might help if you didn’t have 6 pages of pr0n running?

When the first investment was made we were told the reason was for the data. So logically ZX did not need the full buy in to access what they already had access to.
My first instinct is they bought it to shut it down, and i said the same thing when they acquired homebrew suppliers and those businesses are still open. And its not as if Ratebeer is driving the market or the cause of amy lost sales opportunities.

But I do feel sad when when I log in. The forums are dead, i see no other good alternative, and its hard to see this moving ahead long term. Nor do i feel great about adding information that will be used by a non American corporation in ways that will impact small American brewers almost certainly negatively. now I have to pay $13 to the same company to get my ratings so that I dont wake up tomorrow and find the site is gone.

Nor do i feel great about adding information that will be used by a non American corporation in ways that will impact small American brewers almost certainly negatively.

I lost you there; the tale of oppressed America and Americans.
Maybe your words should be spread out globally and used also to convince people to stop drinking Coca Cola and Pepsi…

The real point is about supporting or not supporting big corporations, in fear of what they can do to harm market prices and product diversity/quality.
In the end:

Ok. Just my opinion along with 300 others, but thanks for weighing in…Im sure you know AB was an American company and still advertises hard to portray itself as such, at least here.

I seem to also have bad luck when it comes to entering backlogs… only reason I’m on here today and the site isn’t working.

Blockquote[quote=“fiulijn, post:337, topic:10453”]
AB InBev beer sold in America is largely brewed in America; the ownership has little impact on the workforce it employs and jobs it generates;
[/quote]

I think many many folks in STL would disagree with little impact on the workforce.

Ok. Just my opinion along with 300 others, but thanks for weighing in…Im sure you know AB was an American company and still advertises hard to portray itself as such, at least here.

Sure, but that’s just a pile of BS like any marketing.
How fair is labeling a cheese “Italian pecorino” when it’s produced in Ontario? (I’m in Canada) that’s pure misleading; it usually also comes with an Italian sounding brand and flag colours.

Back to AB, for me it doesn’t matter where they have the headquarters. I quickly saw in Wiki that 2/3 of the ownership is held by 3 Belgians and 3 Brazilians, the CEO may be Brazilian as well, and most likely the operations in North America have a local VP.

I see these corporations as being above country boundaries.

I think many many folks in STL would disagree with little impact on the workforce.

Are “american” brands such as Bud and Goose Island brewed in Belgium?
Genuinely asking.