The chocolate bock is gone as well. That is all.

What did they put in it then? I can’t even imagine what would replace them.

There should be a Holiday pack with Old Fezziwig. The winter pack is mostly the winter warmer and other heavier lager stuff.

Sam Adams variety packs have went way down hill. They all now include both Boston Lager and Sam 76 so less variety than we all would like. Usually only 1 new brew a season as well. Makes me sad since those variety packs are what got me into craft beer pretty much.

I think those packs have always included Boston Lager. I don’t know if breweries throw in their flagship beers because they think it “holds up” against the rest, if it’s cheaper to throw in their most common beer, or because they want to ensure if it’s taken to a party, there’s beer for that ‘one person’ who won’t drink any of the other offerings. I’m guessing it’s because it’s cheaper.

I didn’t think Fezziwig was great, but I always looked forward to it in the pack. I actually enjoyed the chocolate bock too. The pack looked wholly unimpressive this year.

Remember when Sam did that four pack of absolutely fucking wild 1700s-era beers? They may have been almost all actually disgusting but that was awesome. Traditional alcoholic root beer, ginger beer, some weird porter, and apparently a dark wheat which I don’t really recall.

I did not know about those. In 2006 I was a full blown wino living in Los Angeles in fact was in weekly testing group called “young winos of LA”. We went on occasional field trips to wine country and drank wine based on theme very week. I didn’t get really into beer until moving to NY in 2008. Anyways I oddly had a Porter based on same George Washington thing you just linked to last night. Yards General Washington’s Tavern Porter What an odd coincidence.

Yeah. I had it. Just sold it last year. Box was open but I never drank any of them. Started selling out my rotting cellar beers last year.

I have a vague recollection of that - my ratings are all over the place early on in my RB life, I was rating only full beers, and I think I ended up splitting these with my roommates or they drank them and I didn’t rate them. 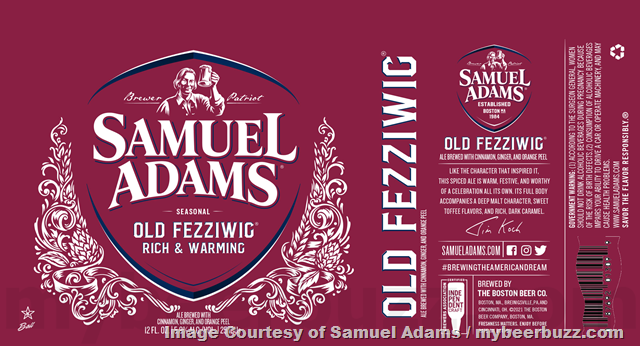 Here’s a returning favorite in a new package from Samuel Adams in Boston, MA . This is Old Fezziwig and it will remain an ale brewed with ...

Yeah, these were mostly all terrible. It was so great at the same time though.

This indifferent new label doesn’t make me yearn for Fezziwig. I want it in a bottle to be able to drink too quickly on an empty stomach before Christmas dinner. I want the label to remind me vaguely of a Christmas Carol, but the shit version from the 70s. I want it back.

Yeah, part of the charm of Fezziwig was the label art. This new art is just boring and bland.

If they absolutely want to keep the can/bottle labeling consistent, at least swap out the picture of ol’ Sam Adams for Fezziwig or something to give it a fun holiday twist.