UT show as being liquidised in 2017

Anyone in the know ? Seems we should be looking to tidy up here and move to Herefordshire from what I can see ?

I’m not at all in the know when it comes to cider but all the info Untappd has does check out.
Real Cider Co did indeed liquidate in 2017, and was finally dissolved in 2019 - REAL CIDER COMPANY (HEBDEN BRIDGE) LIMITED filing history - Find and update company information - GOV.UK

Looks like the Pulp brand was spun off into its own company, but for some reason that is also dissolved - PULP CIDER LIMITED overview - Find and update company information - GOV.UK

I can tell you the Herefordshire address is on both their website and the backs of the cans (photo below).
The address (Wyer Croft) is the same as Celtic Marches so I suspect they’re the ones actually producing it now but for whatever reason keep it as a completely separate brand. 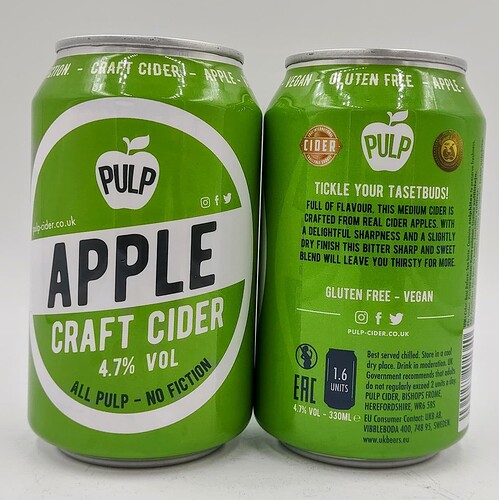 I remember when Pulp went under. Its been resurrected very recently and I’ve seen it all over the place. Someone has bought the brand, either someone connected with the original producer or Celtic Marches. I guess having two brands helps them sell more cider.

Celtic Marches seem to have positioned themselves as the cider version of De Proef in recent years, but with a range of off-the-shelf products for third parties. If a new cider brand launches with a clean, sparkling 5% medium dry, 4.5% medium and a 4% mixed berries cider in 500ml bottles - and no social media posts showing them make the cider - there’s a good chance it’s made by Celtic Marches. Unfortunately, it’s often hard to find any link to them.

Yes … usually beer brewers who have a taproom and want a cider under their own name … see thundering molly or slack Alice Id wager!

Like you say hard to prove and little evidence Funny enough that garbage you posted above is what made me look into this Ed.

Had that one and another (Damson - which really wasn’t too bad) at the cider festival in the pub in the village we were staying in, in Worcestershire the other week!

Looks like Lilley’s has another rival on the scene. Quite depressing how they’ve taken over the cider selection in micropubs / craft bars.

Already mentioned this to @danlo but on our recent visit to East Yorkshire we were expecting to find Udders Orchard, Coleman’s, Orchards of Husthwaite or other Northern cider we don’t see down our way. Nope. Just pseudo-cider Pina colada alco-pop from Lilley’s, Pulp & Sussex Cider Co.

I had a Dorset Nectar Damson at York Fest which was actually quite good, but also Celtic Marches Neapolitan Cider which was flavoured & sweet, and BumbleBee Jungle was just way too sweet tropical flavoured… think Mat’s reply is right that Celtic Marshes is using unlinked brands to get more cider sales

There’s are still afew Yorkshire pubs doing real ciders - Maltings in York had a good selection with no fruit ciders, including Thornborough from North Yorkshire, also Stumble Inn at Northallerton had a fest recently with only ciders all from Yorkshire (inlc. Masham & Grumpy Johns)… sadly the exception, seems that majority of places go for afew bag in box of sweet alco-pop ciders

I’ll definitely keep those in mind next time. Finding these places requires serious detective work. Feel sorry for the cideries trying to get their cider out there.

Yeah, it’s a shame Orchard of Husthwaite aren’t more available around Yorkshire, as they do a range of fruit ciders, but think being a community concern they can’t compete with the likes of Lilley’s & Celtic Marshes. Have seen on visit around Peterborough Hubz cider had fruit ciders in alot of the pubs, and Monkey House Cider from Berwick-on-Tweed Northumberland do them and are available around the North East, so some local cideries are trying to compete with those. It’s interesting seeing keg ciders starting to appear around e.g. Free Trade Inn Newcastle has some on (Olivers & Ross on Wye), for tempting craft drinkers across to cider which isn’t sweet & flavoured

Have you been yet?

No haven’t been. I’ve noticed Michael does make an effort to source cider from independent producers in the Coracle. However he makes no secret of the fact he cannot stand the stuff and has zero knowledge of cider, so does tend to get much of the novelty shite in on the basis that cider’s cider innit.

I did see the two keg ciders were decent on launch tho. Been difficult to get over as cut my drinking down a bit. I will tho.

Here’s what I propose going forwards, which I’ll implement in the coming days if most folks agree.

Retire Real Cider and leave as a West Yorks entity.

Set up Pulp as a Herefordshire producer … set ciders as produced at Celtic Marches.

Move the Pulp ciders (added since 2017 in line with the liquidation of Real) from Real to Pulp.

Am in agreement with that, can’t think of a better way

Have made all the changes I think are required.

Feel free to take a look at the 2 cideries now.

Let me know if anyone disagrees with anything.

Went there last night actually. Good selection. Very quiet in Wellington but every table here seemed to have a single bloke sat drinking by himself, including two at the bar, possibly to get away from the TV. I think it’ll do well, but lacks the ‘pub’ atmosphere which I think most prefer in that town.

Have added it, as it didn’t appear in search results - but just noticed it is already on the site. So needs deleting but I cant do it:

The ambiance isn’t there yet, still all a bit basic and ‘bland’, hopefully it’ll grow some of it’s own vibe and become a proper drinking place; needs some cushions for a start!

I think I added it on the database on opening night, the search engine for places, and sometimes beers is hit and miss these days, but with no @services on the site it’s hardly worth reporting.

The Boot are having a Beak brewery take over this weekend, so if you need some East Sussex ratings (like I do)?

Next weekend they are having a UK brewery Oktoberfest, that’s German style beers brewed in the UK, I know there will be two from Cloudwater as I saw them arrive on Tuesday.

Yes I might head over. I do like Beak. Only 11 minutes on the train so quite handy.

Not sure what can be done with the atmosphere. It is a box shop unit. The bar looks nice, but yes no cushions and could do with some decorations, artwork and greenery rather than bare walls. Toilet graffiti I think could be discouraged, else it could start to look like a Berlin dive bar quite soon.

Back on the subject of cider - I messaged Brew York about who made their cider. They said it was made in Worcestershire. I asked again who made it, no reply.

Any ideas @danlo ? It was a pretty tame crowd-pleasing cider with no personality at all. If they hadn’t said Worcestershire I’d have said it was Celtic Marches. Does Aston Manor have a facility there? Or perhaps it was a red herring, and it was actually Herefordshire?

Really not sure what the secrecy is about? It’s more than a bit irritating that they present it as their own, not to mention being at odds with the ‘spirit’ of craft beer. Why have a cider in your line-up at all? If it’s for your bars, just buy in a cider don’t re-badge it. If this was Brewdog there would be Twitter and Social media pitchforks in all directions.

Looks like they do make ice cider with the juice themselves tho.