I found this referred to on reddit this morning 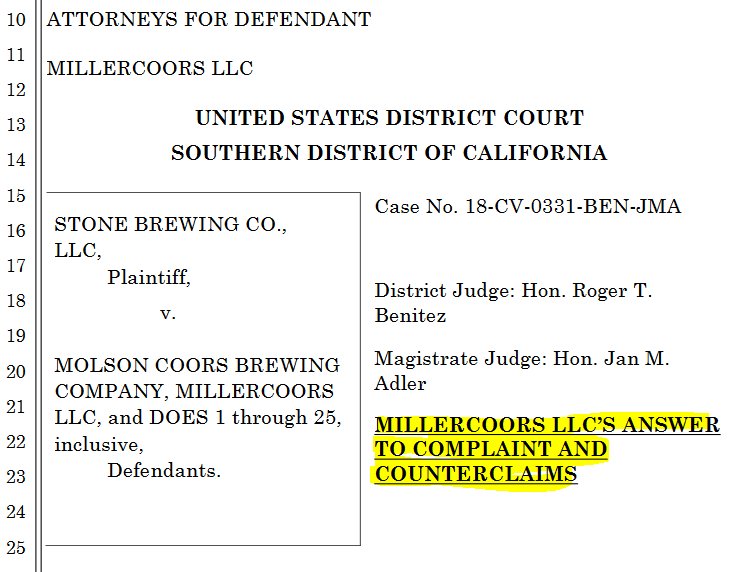 THREAD: @MillerCoors just filed an 82-page Counterclaim and Answer vs @StoneBrewing in the KEYSTONE LIGHT lawsuit. MillerCoors requests a ruling that it, rather than Stone Brewing, is the exclusive user of the word STONE. Copy of the doc available at https://t.co/NlEGv6XbUH

This counter claim analysis covers a number of interesting topics including the state of craft beer and Stone’s place in it as a larger international brewery. Sorry this is all broken up into tweets. It makes reading a bit more strained.

This in particular was very interesting. There are few voices out there that see this positioning/marketing as not only true but obvious. Some very large international and national craft breweries are using labels like “independent” as a marketing ploy around an illusory good guys/bad guys war, that today is exceptionally complicated.

Ouch for Stone, but man, they have some work ahead of them now as a company to keep that name.

Really interesting - thanks for posting this.

And by pure coincidence, I happen to have a can of Keystone Light that my g/f brought back from the US just yesterday. I might try and recreate the Greg Koch spray scene…

Here’s an in-depth video rundown, I believe by the same legal expert.

I’m no legal expert but the fact that Keystone were referring to their beer as 'Stone a whole 3 years before Stone Brewing even began could alone be enough for them to win this, surely?
(EDIT: They say 3 years in those claims but apparently Stone was founded in 1996 which is less than one year after Keystone’s use of Stone. Maybe it’s not so clear then…)

I don’t know what to make of this whole debacle now but it’s certainly become quite interesting. Hopefully folks can keep this thread updated as it progresses; I don’t really use twitter much so will most likely miss any further developments.

Yeah another interesting fact from the video is that only 1% of these cases actually make it into a court of law. Almost all are settled based on available fact, which in these cases are gathered from customer surveys and other methods of determining whether there is customer confusion in the marketplace.

Stone and MillerCoors both make great points. The expert suggested that this concept of laches could be fairly damning for Stone, though. They did nothing to protect their copyright against use by Keystone for many years, and too many years beyond California’s statute of limitations for these cases.

Indeed, the '90s use is a spanner in the machinery. Now it’s got interesting…
First hit for “prior use of a trademark” gave me:

Prior User vs. Federal Registrant: Whose Trademark Is It? | Fish & Richardson

Having a trademark registration - even a valid and incontestable one - does not guarantee the exclusive right to use the mark in all circumstances.


I believe the Stone trademark is an “Incontestable” one, so this paragraph applies (the section above it, about “Contestable” ones bizzarely looks more in Stone’s favour, because of the “and”, but should be irrelevant as I think it doesn’t apply):
“In order to establish its defense under Section 15 to a charge of infringement brought by the owner of an incontestable registration, the prior user must prove the territory in which it has continued to use the mark without significant interruption since prior to the registrant’s use in that territory. The prior user will continue to have rights superior to those of the registrant in that territory. However, under Section 15 and by virtue of the constructive notice of Section 22, the prior user can only establish rights in those territories in which it was actually operating prior to the registration date (possibly including the geographic “zone of natural expansion”), just as with contestable registrations. In other words, even an incontestable registration does not bestow the exclusive right to use the mark where a prior user has continued to use the mark and hence has established rights since prior to registration.”

As the guy in the video mentioned, both are massive international beer companies and both are likely to spend, but not like to spend, on a whole lot of lawyering before this is resolved. And with no real financial benefit in sight, any victory is likely to be partial and Pyrrhic.