Maybe nobody cares about this but me, but the “most rated” option under “My Breweries” is kinda useless. The truncated graphs cut off the digits for all breweries in the middle of your list.

Yep, this annoys me too (although it only cuts them off on my mobile; it works fine on desktop).

But why working on new functions like “Favorites” pages (did someone asked for that?) before fixing what everybody are urging you guys to fix or to bring back since the new layout implementation.

Somehow this question is always ignored. And it’s the most important question there is. Why add new (bugged) features when there are still so many basic things to fix?

Because the redesign is nothing to do with giving (or giving back) existing users what they want. It’s about giving the people who think they know what would attract people who don’t use the site what they imagine will work.

We’ve taken user feedback and made corrections while still completing items that have been scheduled and need to be completed. This is how our scheduling works so that new development isn’t delayed in unforeseen or unplanned ways.

With a big page like this, we predicted we were going to have a big backlog of fixes and we did. We’re getting to the fixes, one at a time. We’ll get to this one as we have all the others.

Maybe nobody cares about this but me, but the “most rated” option under “My Breweries” is kinda useless. The truncated graphs cut off the digits for all breweries in the middle of your list.

This isn’t related to the update but your feedback has been noted. Expect a fix soon.

See screenshot below. On mobile, on a beer page. Where it says “bewerken tags” (edit tags) it should say “rating bewerken” (edit rating).

Just found that out when I wanted to edit one of my ratings. 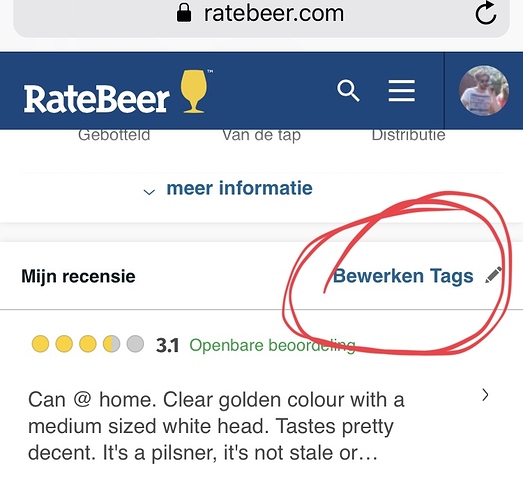 Whoops! We’ll get that corrected.

Thanks for the feedback! cheers

Can we get the reply button unobstructed?

Nobody else is getting the post count covering the reply button on their mobile?

The forums have a lot of weird spacing issues on mobile, with various buttons overlapping other buttons, half obstructed search boxes, etc.

We will never know, they can’t reply…

Yeah, this, to the best of my knowledge, is a fairly recent unwelcome development.

I had it on mobile, which is the only way I use this site.

Horizontal view doesn’t have that problem but I don’t like using horizontal. Shrugs.

I had it on mobile, which is the only way I use this site.

I mean it still works just a smaller space to click

I use the Discourse-app and have the same problem.

It usually sticks to the top of the black footer, but at the end of each thread it gets stuck there. Seems to be an issue of the forum software, not RB as it’s happening in the official app as well.