Good evening and happy Friday all. I have been behind on these stat attacks because I had quite a lot going on at work and was taking a break from beer.

Our next stat attack takes us to East Asia for the second time.

, a country with ancient history, we find ourselves in a different place with its own fair share of ancient history… next up on the Most Difficult Countries to Drink list is China

, with 4,431 users having rated at least one beer from the Middle Kingdom (I wonder how many of those are Tsingtao ratings, heh).

China is the world’s third largest country after Russia and Canada, yet, rather strangely, it only has one time zone.

China is another one of those countries that is always in the news and everyone seems to know something about it. The ancient Chinese invented tonnes of things, including, paper money, gunpowder, fireworks, the earliest form of football, paper, porcelain, teapots, etc. etc.

These days China seems to be known for its economic prowess and hi-tech stuff, one-party state, re-education camps for the Uighurs, zero tolerance for COIVD, censorship (don’t mention June 1989), threatening Taiwan, and social credit scores, among other things.

Unfortunately, this is yet another country I have not visited. Perhaps I will go when they stop locking down and mass-testing everyone for coronavirus.

In terms of beer, my knowledge is very limited. I know there is a Chinese craft scene, but sadly, I have zero experience of it.

The RateBeer database contains 254 active breweries, 0 meaderies, 1 cidery, and 4 sake producers. It only takes 30 beers to enter the top 50.

At present, our biggest rater here is @GuideDogSaint with 387 ratings, and who also appears to be based in China. The rest of the top 10 is made up of folks from Europe and North America:

As for the locals, there isn’t much action, with the lower band of the top 10 having rated just enough to get into the abovementioned top 50 for China.

I have rated a mere 22 Chinese beers from seven different breweries (although I live in a country that borders China, there is next to zero enthusiasm for their beer here, but I suppose it might be different in the border towns). Most beers were from Tsingtao and Harbin, but I have also found a couple from Inner Mongolia (Hailaer), Guangzhou, and Beijing (including a lager that is served in the Great Hall of the People

Given my love for ‘exotic’ beers, if I see something brewed in China I buy it. More often than not, these purchases are pale lagers. My stand-out beer (I gave it 3.5) is Tsingtao Stout (Export), which I will buy again if I see it.

I have rated 372 Chinese beers from 87 different breweries with a low average of 2.44.

My first visitis to China, around 20-25 years, to places such Guangzhou and Beijing ago yielded little else than pale lagers and low alcohol fruit beers - hence the low average. Nearly all the brewpubs I attempted to find where either already closed or possibly false rumours, though the odd one actually existed.

In later years the brewpub scene has exploded. My last visit was in late 2019, finding plenty of good stuff in bars and brewpubs in Nanjing, Shanghai and Beijing.

I have four beers rated 4.0 or higher:

Update: While China is not split into regions here these are my most rated regions:

Easily the largest country we struggle to find beers from in the west, without going there obviously.

Nothing of interest to say. Just 3 rates for me. A skunked bottle of Tsingtao was my first taste of Chinese beer. I did later have a can which allowed for a fair rating. Other than that the only other ones I’ve had are Tsingtao Augerta 1903, and Beijing Gold, both from an Asian foods store somewhere in the UK. All 3 I considered poor.

One that I think a huge amount of people have had is Lucky Buddha which although brewed and bottled in China by a Chinese brewery, counts as an Aussie beer on RB due to the client being headquartered there. Apparently they’ve done away with their unique bottles now? A shame as it was the one unique gimmick they had going for them!

My only other experience with Chinese craft comes indirectly via collabs with UK breweries. Cloudwater did one years ago with Jing-A - an IPA flavoured with lychees. And North did a triple fruited gose last year with Wuhan No.18 (who also brewed their own version of the same beer locally).
As far as I’m aware both those breweries are among the top craft brewers in China so I’d be keen to sample some of their stuff, but without visiting it doesn’t seem easy, and I doubt they’ll ever be exported outside of their country.

Thanks for bringing these back!

A low 5 beers from 3 breweries for me. Best of the mini-bunch a 3.5 for Tsingtao Stout (Export).

Never been to China (as defined), though have been once to Hong Kong. Not much else to add other than that I enjoy Chinese food…

Just noticed that the Chinese brewery list is not sorted (at least not on my mobile), the only time I’ve seen that: https://www.ratebeer.com/Breweries/china/0/45/ .

I’ve rated just 5 beers from China, which really surprised me as I thought I’d picked up a few more along the way. Considering the vast amount of Chinese food and general goods imported you think a container of beer would find its way over here. Strange.

Tsingtao gets a look in of course, also Beijing Gold and Pearl River representing the pale lager category, the latter I picked up in Morrisons of all places. Never seen it there again.

I also picked up a few from National Brewery Centre back in 2019, two from Bravo - a lychee beer I scored 4.1, and a witbier at 3.2 - and a weizenbock from NBeer I gave 3.5, so it seems plenty of other styles to be found.

Never been to China but I am fascinated by the entire country, and love the idea of spending a few weeks there. As such I have nothing negative to say about China, which of course has nothing to do with my choice of mobile phone which definitely doesn’t monitor and log my views should I want to visit in the future. 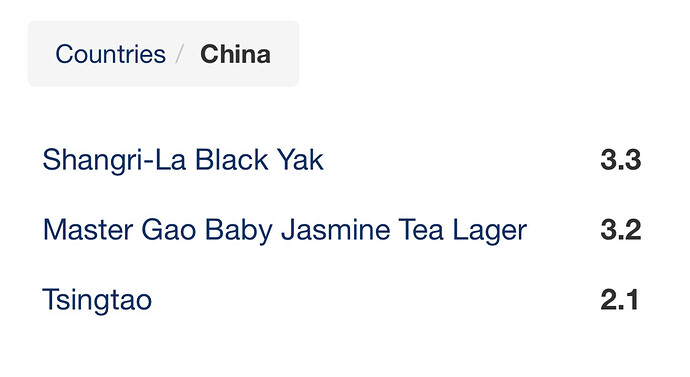 Not much here. 3 different provinces at least. Two crafts were random finds.

Never been to China but I want to walk on ‘The Wall’ one day, so it’s on my list.

9 rates, the best two being shared offerings from minutemat during our monthy beer swap meetings. The scores average 2.22 across the 9 beers, so not great.

Well it’s zero China rates for me - not even a Tsingtao, which is nonsense as I’ve had it loads of times, just never got round to rating it! I’ve never been to the RB version of China - but I have visited Hong Kong, my brother lived there for a few years and I went to see him, no idea what beers we drank, certainly had something Korean in a restaurant where cold noodles were a thing (not for me, guvnor) and doubtless something Chinese of Kong Kongish was partaken, but will never really know. Was all set to visit Shanghai just before ‘the virus’ hit, on a work trip, Visa was in the process of being sorted but obvs never happened, and now looking unliekly to do so for some time. One day …

4 of the beers sampled at MBCC and the other one being the in-famous Tsingtao.

I have managed 8, despite being to China once most of those comes from MBCC.

Top 4 from MBCC, Tsingtao that is readily available everywhere, and 3 picked up in Beijing and Hong Kong.

Quite a difference between the macro beers and the craft ones.

well this one is easy. One beer, a macro lager, while changing planes in Beijing a few years ago. It was xmas day and I was dressed for Thailand where I was heading. Beijing was literally 40ºc colder than Bangkok.

Great to see these up & running again!

I’ve been to China once, back in November 1996 with a mate. The first real test on our overland backpacking trip from Hong Kong to Singapore, buses into Guangzhou from Macau. Just walking this massive city was a experience, trying to find the biggest bus station in China to get a bus towards the border with Vietnam. We had no phrase book & very few people spoke English back then. We happened upon a local guy who spoke a little, who showed us to the bus station, helped buy us tickets & showed us to the right bus in this immense oily station. This was late morning, we got on the bus which after some time left the station with just the 2 of us on it. It drove to the suburbs, parked up in a big open air empty bus park. The driver & his mate disappeared. At this point we had many things running through our minds, some of it voiced. Also we wondered why the bus had bunk beds fitted, rather than seats… I managed to squeeze my 5’ 11" frame in one because it didn’t look like we were going anywhere fast, my mate was a few inches taller than me wasn’t so comfortable. Some time around dusk, the driver & his mate re appeared, fired up the old diesel bus & off we went back to the same immense bus station where slowly people started to board the bus, sometime later in the evening we actually left the bus station & headed into the night, hopefully south… Around 4am we were woken from our sleep & tossed out into the freezing night with only a thin jumper to wear each into a small riverside town which appeared asleep.

I could continue for pages, for just the 5 days we spent heading south & getting across the boarder. It really was a eye opener for us, even having travelled Africa the previous year.

I remember drinking Tsingtao for 25p a bottle… as far as rating go I’ve only 4, if Lucky Buddha is Australian!

Have never been to China and only have the one rating:
Tsingtao at 2.1

From the reviews would be worth tracking down!!

Had this drink when I was visiting Shanghai at a club called Muse on the Bund. Was really surprised they had cider but after my girlfriend and I tried it we absolutely loved it. Didn’t feel weird drinking a cider in a club - in fact it felt pretty natural. At 4.5% ABV, it was stronger than most beers I’ve had. Waiting for it to come to Taiwan!

The gold cider for the price, taste, and health benefits is the next replacement for water. Once the Chinese fall into it one way or another there will be no stopping this delicious refreshing LPR(LiquidPantyRemover).

This was a great cider. Beautiful colour. Taste is pleasantly sweet apple without being too much. I loved this cider.

Bottle in Shanghai. This was a suprisingly good cider. Not overly sweet, a bit of tartness. Yellow colour. Refreshing.