Moving along with the country stat attacks and continuing our journey in Asia, we have reached sunny, hot, and very humid Thailand

Thailand is right next to China

on the Most Difficult Countries to Drink list. According to it, 4,168 beer lovers have rated a beer from the place that was once known as Siam.

, and low prices (from a European point of view at least). Thailand is known for its Buddhist temples, unique cuisine, tropical fruit

and that law about not insulting the king

, numerous military coups (the latest being in 2014)

, being the place that Red Bull

originated from, and so on. It is also the only country in the region that was never colonised by the Europeans.

, well Bangkok, or Krung Thep Maha Nakhon as it is known in the native Thai (and that isn’t even the full version of it), is the city with the most breweries on Ratebeer (131), but at the same time, domestic craft beer is illegal/underground in Thailand due to legislation that favours the country’s mega breweries:

Current laws restrict brewing licences to manufacturers that have capital of 10 million baht (£230,000), while brewpubs must produce at least 100,000 litres a year and only serve their beer on their premises. The legislation effectively blocks new, small breweries from opening, and tips the market firmly in favour of two powerful companies – Thai Beverage, which produces Chang beer, and Boon Rawd Brewery, which produces Singha and Leo.

More on that here.

The RateBeer database contains 184 active breweries, 1 meadery, 1 cidery, and 2 sake producers. The threshold for entering the Thai top 50 is veeeery low — the 50th spot is occupied by forum regular @BeardedAvenger with 15 rates.

At present, our biggest rater here is @jmgreenuk with an impressive 1,085 ratings, and who is based in the region. The rest of the top 10 is made up of raters from Europe, North America, and Australia:

Sadly, the local user base is a different story altogether, with only two active users, @medkung and @abstractic:

I have been to Thailand twice, visiting Phuket in 2012 and 2014. I must say that I loved it and a return trip is definitely in order.

My last visit was a few months before joining RateBeer, so naturally I cannot boast anything major in the way of stats: I have seven rates. And according to the database, there was only one craft brewery open in Phuket at the time.

So I spent my had-earned drinking money on pale lagers and the odd bottle of Thai rum.

Thailand is my 42nd most rated country with 111 ratings from 44 different breweries. Average score of 2.82.
Until now I have only ever visited Bangkok and surroundings, and only for work.

Nearly all top ratings are from my latest visit to Bangkok, as modern craft did not really exist in Thailand 15 years ago:

According to the split on brewver.com nearly all are from Central province, where Bangkok is, and I miss out on both Northern and Western: 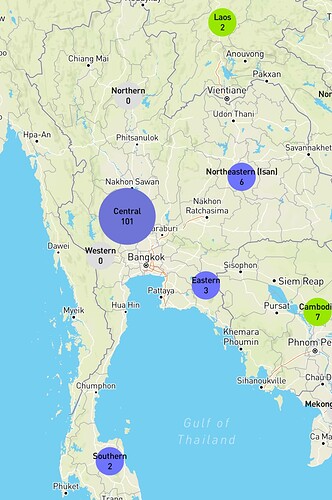 Nice to see I somehow managed to crawl into the Top 50. And apart from two beers which I had in restaurants in Guildford, the other 13 were all drunk at Cotts and provided by @jmgreenuk. Without having looked, I wonder how many others are in the Top 50 thanks to Cotts.

Just the 12 rates for me (never been), and like @BeardedAvenger most of those are down to a couple of Cotteridge Gatherings and John’s (@jmgreenuk) offerings from his ‘stash’. Those 12 beers come from 8 different breweries by the way.

It’s not really on my radar, but I might venture there one day.

A quick one from me. Never been to Thailand but I have tried 5 beers. The only brewery of interest is Full moon, who I believe is run by Americans and adheres to American style brewing techniques. 2 beers brought back from Thailand from a friend who lives over that way and shared with @BlackHaddock 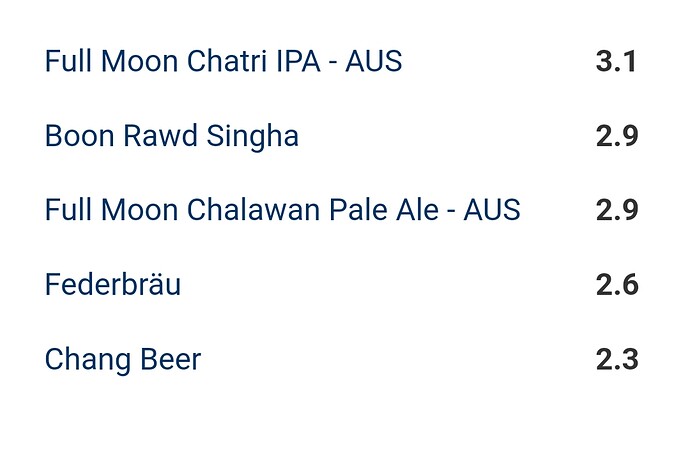 Only 2 rates for me both macros. I do love eating Thai food but all the restaurants never have any decent Thai beers, usually get Thai Ice Tea which is a nice treat. Especially since some of spiciest food I’ve ever had is Thai, the creamy ice tea better than beer to put out fire.

I feel like if you call yourself a traveler Thailand is a prerequisite. That being said I’ve never been and my wife has no desire so I may never be a traveler despite how many places I visit.

A rather modest 5 beers from 3 breweries.

I stayed in Khao Lak for two weeks with my wife back in 2011, and three of the beers were consumed while there.

I’ve always loved Thai food, but the best I’ve ever had was from a basic beach restaurant next door to the hotel. We ended up eating there almost every night.

Did some sightseeing trips to Phuket/etc, also a boat trip to The Beach. The latter was a great day until we were surprised by bad weather on the way back. We were a cold and very wet bunch when we were finally off the speedboat.

Definitely a country I would go back to for the food and the beaches.

I’ve still not got around to rating a Thai beer, despite having sampled Singha several times over the last couple of years! Have managed a trip to the country, many years ago enjoyed a few days in Bangkok as part of a whistlestop tour of that part of the world (also visited my bro in Hong Kong, had a few days in Singapore and a relaxing week in Bali) - zero idea what beers were drunk as ‘ticking’ wasn’t really my thing back then. Bangkok was utterly chaotic, but enjoyable at the same time, and I would go back.

Been thrice, the first time was 2013, did two brewpubs in Bangkok, one of which (Londoner) is now closed and definitely no loss, the beers were awful. By subsequent visits craft brewing had taken off, have had 35 beers listed as Thai though due to the restrictions on brewers noted above many are actually Cambodian.

First visit we stayed around Bangkok, second trip started at Bangkok then down to Hat Yai, some time there (despite Foreign Office advising against travel) and on to Malaysia, then the third time again started in Bangkok, but flew north to Chiang Mai then came back by train

Thailand was the first country I visited when I commenced my travels back in late '94, spending 2 weeks across Koh Samui, Phuket & Krabi. It was of course coming from the West & little old Jersey island a bit of an eye opener! Two and a bit years later I returned for 2 months as part of my overland trip from Hong Kong to Singapore, still stunning but the rampant development was all apparent even after that time. Which is one of the main reasons I’ve not returned.

Beer wise while in the country I drank the Chang elephant beer as we called it back then, not rated here.
Twenty or so years ago Jersey started getting Thai restaurants opening, we now have around 15 which is surprising considering the size of the island, Singa was offered at first & now the original Chang also. A friend brought me back a bottle of Leo from the country years ago.

I really enjoyed my time in Bangkok, so would be very keen to explore some brew pubs there at a future date.