Here are my non-English regions over 100:

Here is what I got: 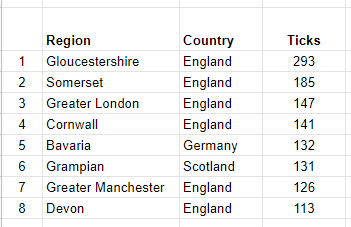 This is fun! (Despite me not reaching that bar for many regions!)

A slight home bias towards Ontario

I am currently on a quest to tick every brewery in Ontario actually, and it’s been a challenge as they keep opening new ones far away from me!

Came close with Auckland NZ (89), and a near miss with Newfoundland, Canada (98). Newfoundland is probably the only one I would actively try and get over that threshold. I thought I would come closer with Scotland and Wales but alas no.

I only have eight countries with 100+ ratings, and I I have seven breweries with 100+ ratings (two more sitting at 94 - but both are breweries I don’t necessarily want six more beers from LOL) France and Wales are within shooting distance of 100 but far enough that I am unlikely to hit that anytime soon without a trip to UK/Europe.

I have 56 Regions over 100 Ratings now but a majority of these are England Counties where I have 44 of the 46 in the bag. Unless something mad happens with Rutland and Isle of Wight I can’t see those joining the list at any time.

Of the Other Countries

Nothing but getting close with Grand Est on 94

Plus Getting close is Dyfed currently on 91.