ALDI (Eng) are having a Summer Beer Festival: nine beers, one cider! Nothing too exciting, but there will be three new rates for me. The brochure I have in front of me is a slightly different list to what the Sun published, so may be more ticks for us all? 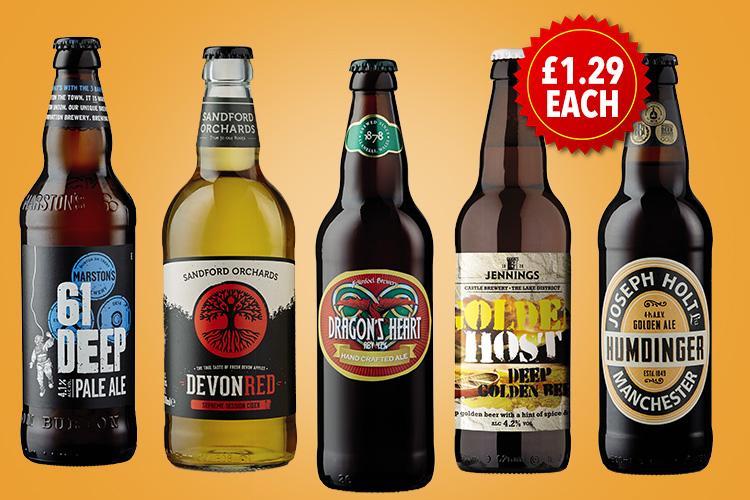 Aldi launches new range of British craft beers - and they cost £1.29 each

ALDI has launched a new range of British craft beers – and they cost just £1.29 each. The range includes 16 ales and beers that will be available in Aldi stores in England and Wales from this…

I’m afraid that article is from the end of May, Im guessing the bulk of those beers will have been sold by now.

I’m afraid that article is from the end of May, Im guessing the bulk of those beers will have been sold by now.

Yes, realised once I’d posted it. Just the nine beers and one cider to select from then.

Just saw the following on the Morrisons website. Is there anything for Advertising Standards to take action on here given that the beers are (a) not UK beers and (b) there’s no evidence presented for the claim of “best”?

In brighter news, Sainsbury’s look like they might have finally noticed they need to make a bit more effort in their beer aisle. Saw the following 440ml cans on a recent visit:

Looked like there was space for maybe a few more too.

I picked up the new Sainsbury’s beers last week, nice to see some new beers in there.

Popped into Telford Town Centre today; the M&S has less beer options than it used too, but more ciders. B&M Bargains gave me a new Butcombe (Wickwar Just The Ticket), and Shepherd Neame Strong Pale Ale which is also a new rate for me.

Just saw the following on the Morrisons website. Is there anything for Advertising Standards to take action on here given that the beers are (a) not UK beers and (b) there’s no evidence presented for the claim of “best”?

Unfortunately I’d guess not, because (and I’ve not checked this) those beers are probably all brewed in the UK under license, making them “UK beers”. And “best” they can get away with because those beers are likely the ones that sell the most and/or make most profit year on year which is a valid way to measure “best”, albeit a shitty one to use in this context.

It’s pretty sad to see Morrison’s promoting those considering they’ve been making more of an effort with craft over the last year or so. Also, those beers will always be popular and will never struggle for sales, so why even bother promoting…

why even bother promoting

I suspect because they were paid some wonga by the manufacturer to do so.

Another good reason to never enter a Morrison’s, on top of a miserable shopping experience. I hate that type of misrepresentation, big business hand in hand, promoting each other

Had to pay a visit to Asda today, not somewhere I frequent - fair to say their range is garbage! Did bag a German lager, thinking it might be a new region and be OK - schoolboy error, get home and check it out, and its rates are

and I’ve already had a beer from Saxony

100% agree, nothing good at ASDA. I find Waitrose and tiny CooP is my best choices.

Same, only Waitrose, co op range is limited near me, its OK. So easy to buy a great range online, but I will pick up the occasional supermarket can. Loved it when M and S were selling Stone IPA

We’ve shopped as ASDA for the last four years, I basically don’t buy any supermarket beer. Well, hardly ever.

Ocado has random stuff - their own selection plus M&S.

Co-Op depends on the franchise. The ones near me used to stock local breweries but have all stopped.

Nearly bought the Sainsburys ones but then remembered I was heading to Wine Rack afterwards so put them back, other than the Siren saccharine bomb.

I guess the CoOp, my local is a mid sized one, is the only supermarket i tend to pick up beers from.
Choice isn’t bad and they seem to focus on surrounding counties so Oxfordshire and Northamptonshire feature quite a bit and Worcestershire also.

If you don’t mind me asking Colin, which Co-op is that & which Worcs & Northants breweries? Might be tempted to take a trip to the other side of Wycombe to make those counties a bit bluer!

Missed your ask about breweries … not been in since December but then they had 5 from Pitstone and 2 or 3 from Phipps and Saxbys (ciders) Northants wise.

@Theydon_Bois and @wheresthepath - to completely hi-jack the conversation and taking of Bucks recommendations: are there any places in Bucks that so mailorder that you know of? Realised I am only a few ticks off the leadership board for Buckinghamshire. Could order from Old Luxtons or Chiltern but was after more of a range. Although Blackened Sun seem most interestingly if not distributed.