Our 30th country finishes off Scandinavia (see what I did there?).

5 and a half million people live in Finland, they have more saunas than lakes apparently and there are 187,888 lakes within it’s borders. They also have loads of reindeers and Nokia stuff, but only one Santa Claus village, they also introduced the world to ‘Eukonkanto’ (google it if you don’t know). The country also produces fast drivers in both F1 and Rally Cars.

173 active Breweries, 39 closed on the database, 30 Cideries, 12 Meaderies and no Sake producers. We have some well known names on the lists below, most still rating on here too. In fact @TBone just reviewed the millionth place on RateBeer this very week.

Over to you, please help these weekly threads to continue, all and any contributions are much appreciated.

Finland, the land of sisu and very long words (making life hard for designers of multilingual websites)… Used to spend a few weeks every summer holiday in Finland when I grew up. Mostly northern part, but also in the Mikkeli area. Yes, we did sauna almost every evening! This was before I was of legal drinking age, though.

Only 25 beers from 12 breweries from 7/19 regions. Some nice dark beers rated, and I do like the few sahtis I’ve tried.

Surprisingly there are 30 cideries in Finland, with Kuura Cider (Brinkhall Sparkling) having the most listed with 19 entries

The top 5 raters for Finland Ciders and Cideries are:

No mention of Moomins ?

I also have two tastings and both are collabs. And the scores are contrasting.

|Pyynikin / BrewDog Tampere Dead Sunshine|3.8|
|Maku / Bone Machine Maku Machine Sea Buckthorn|2.9|
The Imperial Stout clearly impressed in terms of aroma and flavour, but the NEIPA was only slightly more popular with me than in Finland itself.
Apparently wife tossing is a sport in Finland which may deter my other half, although she has been to Turku and knows a few words of Finnish. I am more deterred by the size of the mosquitoes in the summer and they swarm like Scottish midges I am told. Since I emit a very strong “come and get me” signal to all mosquitoes, Finland is off my list.

Hey! I can login again!

21 ratings, 3.42 average puts it at 17 most rated country and #8 by average, both of which are higher than I would have guessed. Tickeed 7 of 19 regions, no place ratings.

All shared by Timo from Finland who connected with us when he visited Toronto a few years back.

@Martinsh beat me to it.

Loved the Moomin books when I was a kid (still do actually). Snufkin was a bit of a childhood hero of mine. Didn’t like the TV show/films though.

Never actually been to Finland, but it’s a place I would very much like to visit as it looks stunning - not sure when I’ll get around to it though. In the meantime I’ve only ever tried two beers from the country, so here’s both my top and bottom two:

I have 1406 Finnish ratings, which makes it my 7th most rated country.
I blame the low average of 2.71 solely in @oh6gdx 's efforts to overflow me with “interesting” stuff.

Finland was actually the first northern European country where modern days microbrewing shot off. Remember being super impressed by breweries like Stadin in the 90’s. Seems like they hit more of a plateau phase when neighbouiring countries saw a dramatic increase. Given the proximity to Finland it is one of my most visited countries, and I have enjoyed numerous pub crawls in Helsinki and Turku, as well as som beer festivals and of course some infamous gatherings in the Ostrobotnian outback.

My most rated regions are the expected ones. But I still miss a single tick from Kainuu!

My top rated breweries are:

I have never visited Finland, nor have I ever had a beer from there - so very little to say. Except Moomins. And Lapland

63 of the rates (+ the cellar beers) are from Uusimaa.

16 place ratings. All from Helsinki. The highest rated being Pien at 80. 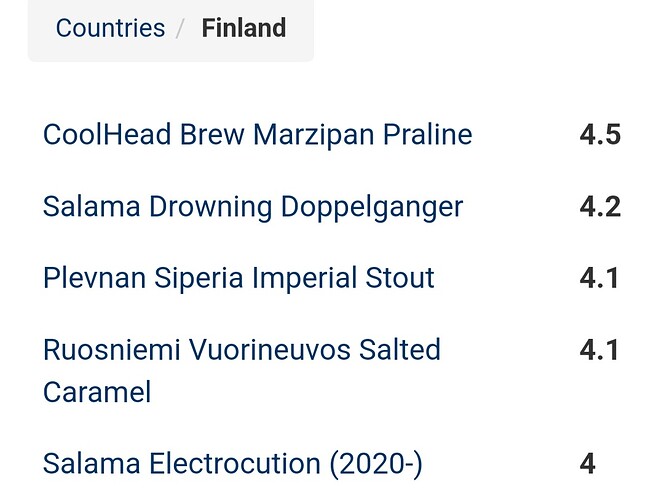 My Mother studied English at Uni in Oulu so got a summer job in Farnborough. The rest is history.

49 of my ticks were when I finally got back out to Finland after having joined Ratebeer. Plus two trades. The pre-Brexit trade was successful as I managed to get hold of numerous Oulu beers. In fact - I’d never noticed this before - but I am #39 for North Ostrobothnian ticks. 2020 trip to Oulu has now been pushed back to 2023.

Pick up all the Coolhead and Salama I can now that they get distro here, plus Baltic Porters and stuff claiming to be Sahti. Did manage 5 Sahti in Helsinki. The main drawback of last year’s BBNo Riverside Beer Fest was that the two Finnish breweries were late arriving so not on during the first session.

By the way, can anyone tell me which image I doctored for me profile picture?

(Also, harking back to a conversation at a tasting on Friday, Finnish beers don’t often score siper high but that seems to mainly down to Finns using a less generous scoring system than other countries.)

Only 6 rates but from 5 regions. Most rates came from @VastActiv who would buy Sahti on way to airport and then I’d meet for in person trade immediate upon arrival in NYC to get back in fridge asap. Most ratebeerians I’ve met is due to my style ticking ways. Haha 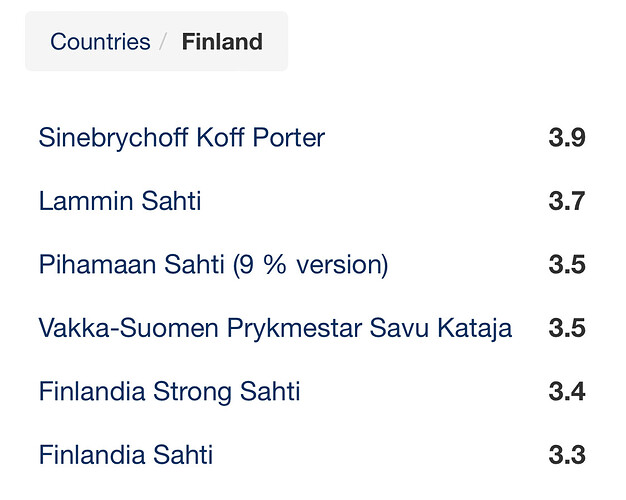 I did watch the following Finnish shows on Netflix Bordertwon, Deadwind and Arctic Circle.

Thanks to jjaappp (or however you spell it) for slinging me a load of beers in a euro trade, bolstering my ticks somewhat.

Been to the country a number of times. First taste of Suomi was helping a friend move house from North London back to Helsinki, which involved me driving her with a couple of friends to keep me company on the drive back. Was a fun trip. I learnt words like Moi (hello) and Moimoi (goodbye) and experienced the overnight Stockholm-Turku ferry for the first time, which basically turns into a student party boat on Summer weekends.

Been a lot in my touring years, always to Helsinki then back out next day, but once to Tampere and I have a feeling I made it up to Oulu once.

Only been once during my ‘beer years’. Quick couple of days in Helsinki then up to see Santa in Rovaniemi. Recall walking round Helsinki zoo in -19c. Only went to a few bars, Villi Wäinö, Brewdog and Olhus Stockholm… all fairly quiet when I was there early Jan, but pleasant enough. Couldn’t for the life of me find sahti over there, but thankfully @japppp delivered the goods and sent me a huge bottle back in 2018.

No plans to return but would like to explore the far north by bike in my semi-retirement years, being careful not to incur into Russia of course.

My first visit to Finland was back in the early 80’s as a kid when we during summertime drove to Karigasniemi in Northern Finland. Our nearest destination abroad when visiting my grandmother in Northern Norway. In recent years I have mostly visited Northern Finland/Lappland when driving from Southern Norway via Sweden and Finland to Porsanger/Lakselv in Norway. In 2014 I did a solo trip by car from Turku to Kirkenes in Norway. I visited Tampere, Imatra, Savonlinna, Kuopio, Kajaani, Suomussalmi, Saariselka and more. In 2019 I did a major pub crawl in Helsinki.

I’ve been to Finland a few times, but mostly for short stays, so my 87 rated beers are hardly a very impressive number. And relatively few Finnish beers have been imported to Norway.

been thrice, many years ago, and as an adopted Yorkshireman I didn’t do much drinking, as in all the Scandinavian countries. Had a fair few delivered to home during lockdowns when Beerdome was an option though, especially Coolhead, amazing sours. 22 beers total in the country, and 26 at home, poor showing really

Prices are pretty similar these days.

Hmm. Was this to be the last stat attack?

Starting to miss these already…

I must admin I have lost interest because of the poor responses and negative replies, so stopped bothering. Happy for anyone else to take over.

Has anyone really been negative about it? I think they have been great.