, we find ourselves in Switzerland

According to the Most Difficult Countries to Drink list, 4,538 users have rated at least one beer from Switzerland.

Switzerland is a small landlocked country in Central Europe, but is also a pretty unique place. They have four official languages: Swiss German, French, Italian, and Romansch.

Switzerland, unlike most of Europe, is neutral. Also, it is not part of the European Union

, the European Economic Area, the Eurozone, or NATO. Their army/militia is mainly made up of conscripts and volunteers, and (if I have my facts right) soldiers keep their guns at home, but with no ammo. Switzerland is also known for its “direct democracy”, which lets any group of citizens challenge federal laws by holding referendums (this really appeals to me… it would have been great to reverse Brexit, but I digress). Swiss cities consistently rank top in the best places to live in the world.

I have never visited Switzerland. I have an image of it in my mind as a very beautiful, clean, calm, and wealthy place.

So to throw some stereotypes out there to make up for my weak knowledge of the country: Swiss cheese, expensive watches

, stunning landscapes, small houses made out of wood, skiing

. Damn, I would love to visit the place to be honest.

OK, as for beer, according to RateBeer, there is a lot of it in the country. In fact, one of our users, @Bov, has compiled an excellent guide listing all the breweries in all the 26 country’s cantons (regions): the Ultimate Switzerland Beer Guide.

As it stands, the biggest raters of Swiss beers is the aforementioned Bov, with a massive 5,392 Swiss beer ratings, or 67% of the current database

. The rest of the top ten is made up of users from Switzerland

. Quite a few well-known names here:

Switzerland was one of the countries for which were lucky enough to get a region breakdown. In terms of regions, @CH-303 holds the crown with a clean 26 out of 26 regions, while Bov is in second with 25.

I’m gonna kick this off. I have a pathetic four Swiss rates from three regions. Only one of those beers was actually physically purchased in Switzerland (Locher Quöllfrisch Hell, at Zürich airport), thanks to my brother.

Special mention: picked up my first Kosovo tick via Drinks of the World in Zürich.

I used to live in Switzerland, those were the days which started my ratebeer journey (together with anstei, King_Alex_II, and some others). The country’s beer is generally not as good as Germany’s and Austria’s, but there are some hidden gems. I consider BFM’s Abbaye de Saint Bon-Chien a world classic.

Managed to get to 10 recently thanks to a fest and a tasting. 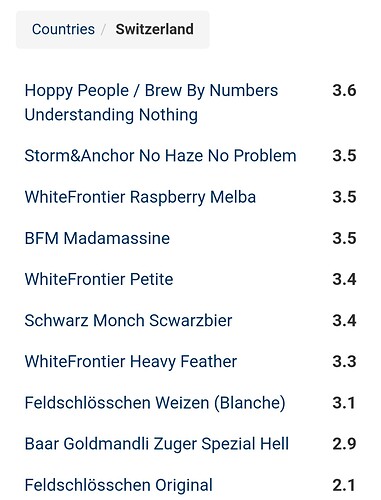 I added the Schwarz Monch brewery because their beer is also contract brewed at one of my local breweries. Note: my spelling error had never been picked up.

Have only been in the country once for a flight to Basel travelling onto a work training course in Germany, so didn’t get any time in Switzerland itself

There are 15 active cideries in Switzerland, with Cidrerie du Vulcain - J. Perritaz having the most entries with 16

The top 5 raters of Switzerland ciders and cideries are:

I have an even 10 ratings dispersed amongst 4 breweries and 3 regions. Spent lovely day in Luzerne once. Had a great lunch of fondue on the river front and enjoyed a local brew at brewery that was also right there. As an avid hiker of mountains and also my wife & kids are great lovers of chocolate, we need to get back.

Pics from a decade ago 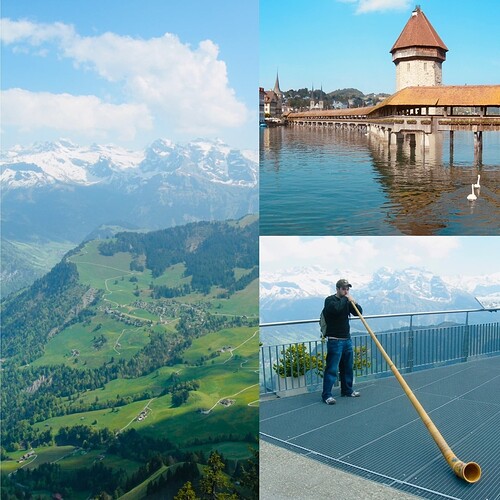 15 Swiss ratings for me, from 8 regions.

I have visited a few times over the years, but only once since rating beers; driving through to the South of France for a wedding. Really miffed when I discovered the motorway services didn’t sell beer, as my plan was to find a few random cans/bottles as we stopped for a toilet break.

Both my son and my son-in-law flew in and out of Zurich for work at different times; both managed to buy me the same shitty cans of beer at the airport before flying home.

It’s the thought that counts I suppose!

47 Swiss ratings for me. Majority have been received by trading with “local” legend @CH-303.

I have one stand out brewery in my rates which is Trois Dames, having rated 2 beers from them 3 years apart and given both a 4.0 but I see today they are sadly now closed down.

Regionally I’ve tasted beer from 20 of the 26 Cantons with @CH-303 recently sending me a box with 7 I’d not had before (I’m hoping in our next trade he’ll find me at least 5 more!). But Appenzell Ausserrhoden is an extremely difficult region to get a beer from apparently so 26/26 will be a real challenge.

Have not visited Switzerland as such but vaguely recall travelling through the Northern part once on a coach on the way to the Tyrol. Not enough time to get colour on the RateBeer country place map sadly. I need to correct that at some point.

I guess another interesting fact is that Switzerland is (allegedly) the country with the highest number of breweries per capita. I think that’s because it’s so easy to register as a brewery here, and quite a few breweries are just someone brewing in their garage or basement. It’s therefore a bit of a gamble going brewery ticking, as you might get a really good and well made beer or something infected from a below average home brewer. But it’s fun “hunting”, I guess.

Unfortunately, from the top-10 list five of them have stopped rating completely (King_Alex_II in 2016, Bov and weark in 2019, Anstei and eduardovl in 2021), in addition Embrouille and rand seem to not have rated much recently. With so many “big hitters” out of the game, it’s harder to keep RB up to date for the Swiss beer scene.

On my side, recently took the number two spot in Switzerland for both Swiss beers and Swiss raters, but of course easier to overtake when the ones in front don’t rate any longer… I was very happy to get Switzerland split into regions, and even happier when I reached 26/26 earlier this year after visiting the final canton where there is just a couple of breweries and neither of them bottle their beers.

A lowly 7 rates for me. Never been to Switzerland but wholly agree with your write up, Mark, it sounds like an almost idyllic country from an outsider’s perspective.

Swiss beers are difficult to pick up in the UK, with “1936 Bière” the only one I’ve seen on the odd occasions over the last few years. 5 of my 7 are from WhiteFrontier. A few years ago they did a spate of collabs with UK breweries (Cloudwater, Wylam, BBNo) and HonestBrew (RIP) imported some of their beers at the time. Haven’t seen them, or indeed any other Swiss breweries, since then.

29 Swiss beers from 8 Swiss breweries across 6 Swiss regions for me.

The lions share from the now out of business Trois Dame, but overall favoured my next most rated brewery WhiteFrontier

Suppose not bad as I have never been there (although was close to moving with old employer many years back) but would still like to visit one day for sure.

Thanks to Anstei for bulking these rates with a trade back in 2018 and introducing me to a lot of independent Swiss breweries.

Been to Switz numerous times. It really is a stunningly beautiful place, not a fan of the cities, but the countryside and mountains are something else.

Have to agree L’Abbaye de Saint Bon-Chien is a stunning beer, and worthy of all praise. Always a pleasure to reacquaint with one of these.

Driven throughout the country quite a bit, but only visited once in my RB years, though I once sent a driver to Drinks of the World when he was passing to collect a box of beer, including a couple of rare countries. This beer shop chain located in major city train stations is a must-visit and quite affordable. Unfortunately, the price is often a sticking point for anyone picking up interesting beer. We stopped at a specialist beer shop in Bern which had an abundance of interesting corked and caged gems but unfortunately just too expensive, so left with a handful of cheaper cans and ended up buying a few from the local Co-Op / Spar instead.

I will return in the coming years for a 3-day bike-packing trip, really looking forward to it.

Thanks for the stats, @YantarCoast

And I reached 8k Swiss beers 2 months ago

Switzerland is another zero rates country for me! I do know I had a 1936 Biere once (I know this because UT tells me, at a wine bar in Chester as it goes) and I’m pretty sure I must have had some Swiss beers during a work trip to a small lakeside chocolate-box village/town not far from Neuchatel back in about 2009/10 (must have, surely?!). Have been to Switzerland a couple of other times, but when I was a boy/young man and beer was not really on my radar: a day trip to Geneva when we holidayed in Chamonix in the mid-eighties and a day trip to Basel when we holidayed in Colmar in the very early nineties. All I really recall about the place is its breathtaking beauty and apparent laid-back-ness, and I’d love to return - am very keen to visit Zurich and check out those gnomes

Switzerland is my 12th most rated country with 586 ratings from 181 breweries. The reasonably high average of 3.08 is much thanks to beer selection being curated by @Bov

There is an abundance of really high scoring beers, top ones are:

Most rated cantons are:

Some of my highest rated breweries are from Switzerland, top ones being:

For some odd reason I have only visited Switzerland during summertime. At least twice I recall this has resulted in beer tasting with @Bov

I’ve had several Vulcain ciders, & they’re great, unfortunately that’s all I’ve ever tried from Sweden aside from the odd BFM pour that I never seem to rate. They do make a very sought after ice perry for those that need that category. Still waiting on @SinH4 to ship a crate stateside to distribute.

Round trip tickets for your birthday party have dropped dramatically to $2200.

Sweden? Damn, you so ‘Murican