This looks like it is fixed. Now I’m seeing beers with a style rating of no less than 70.

No more Lithuanian imperial pils with style ratings of 11. 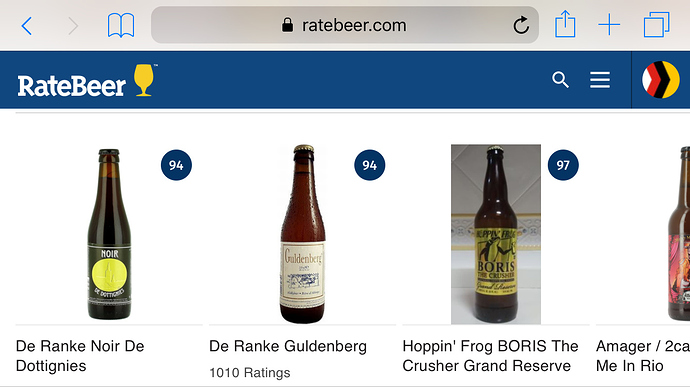 But are/were those beers really nearby? Seeing there is Hoppin’ Frog beer up there.

Mine is fun because apparently I’m the only rater anywhere near me, so it just shows beers I rated.

They were a year ago, when a friend from RB visited here and rated them. Don’t know about now.

Anyway, I spoke too soon. It’s reverted back to the usual list.

Top Nearby works for me (though it’s not particularly useful given the scant data, even in nyc), however Top 50 just shows me 4 random beers. Considering the prominence of these elements—top nearby being above the fold on the homepage—you’d think a little more effort would be put into them, else they should be moved.

Interesting mix of brews there.

Yeah it actually took me a minute to remember/figure out where this even was.

What is the distance radius to be considered Nearby anyway?
Many US beers often pop up on my Nearby list when I’m on Desktop web, it seems more accurate on mobile web…

I only get beers from Archibald and one from Sergent Recruteur (who’s been closed for what, 10 years?)

That’s probably it. But if you want to claim top add a threshold it needs meet to be shown

Hi all, thanks for pointing out this bug. We released a fix today that should solve the issues discussed here

Mine certainly looks much better than before! 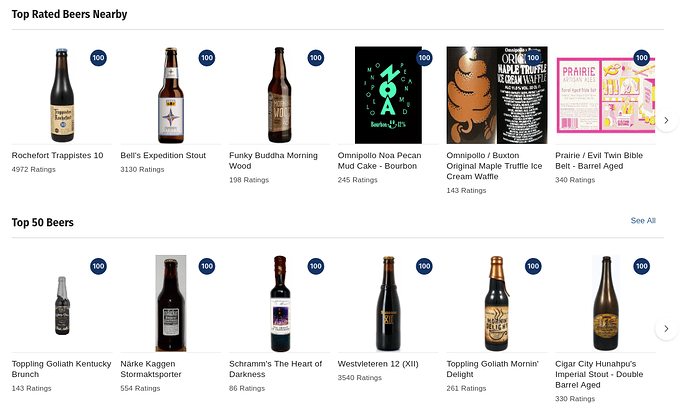 This is even worse on desktop now…I don’t know where the site think I’m located (I’m near Montreal, QC, Canada) but none of those beers are available in stores/pubs nearby except maybe the Rochefort…

none of those beers are available

I don’t think the system is at fault here. It’s mostly likely due to fake availability entries. I noticed this where I’m based (Russia) – the Best in Country (which this front page list is based on, I suppose in your case it is based on the best beers “available” in your subregion, Quebec) was showing that Toppling Goliath and Schramm beers were available, for example.

Turned out that these much sought after beers had simply been added as available at various venues, none of which actually stock it of course (for example some brewpub out in the provinces that only sells two of its own beers).

The only way to deal with this is to manually delete the entries.

I can’t scroll down to Canada (it’s too far away), but here’s some examples of these fake availability entries:

Now we look at the best beers in India: 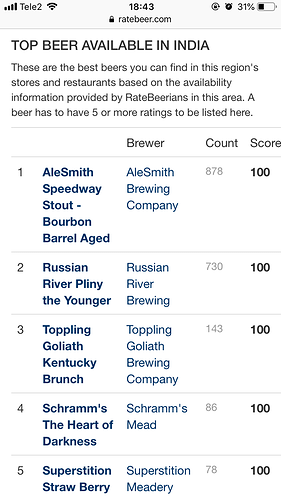 You’re partially right.
Of the 6 listed in the page on my picture, 2 of them have false/erroneous distribution, but the closest distribution of the 4 others is 80km away…which is a way too big radius…it should be capped to less 10km…maybe even less

Id rather it was caped on score than distance. Yeah its not great but far less embarrassing than best available locally is bud light as its tge only data we have in Xkm

I don’t think the system is at fault here. It’s mostly likely due to fake availability entries

Experiencing the same, while until yesterday was showing only beers in my Suburb, beers that I added myself to places nearby

Here you go, tonight, seems RB saw me near Sweden instead of Quebec, Canada. My closest Nearby choice is from Sweden and I’m supposedly 100km from that place…