Trying to Remember a Drink

Wonder if anyone can help me?

I am trying to remember the name of a bottle of drink (maybe a barley wine) that used to be stocked behind bars in a holster during the 1970’s - 1980’s in the UK. The bottle was about 5 - 6 inches in length and of a high percentage (a bit like a Stingo).

One of those where I can’t get it out of my mind until resolved I’m afraid!

Any more clues eg which area of the UK, what colour label etc?

Long before my time but I’ll have a random guess at Watney Mann Stingo as they might have done something tacky like a holster! No. But damnit now I’m wanting one!!

Surely it’s not that ‘Colt 45’ that hit our shores for a few years before leaving forever (hopefully). It is still around though, but thankfully only in the US.
https://www.ratebeer.com/beer/colt-45/5975/

Many thanks for your suggestions. Used to see it at my old rugby club around late 1970’s early 1980’s. When I mean a holster, more like a gun cartridge belt, so bottles were quite small.

Apologies, May have found it and it wasn’t a barley wine it was a herbal digestive called Underberg. Many thanks for your help. I should be able to get a better nights sleep now.

Bugger me, I should have guessed that was the answer, but claiming it was a beer didn’t help! 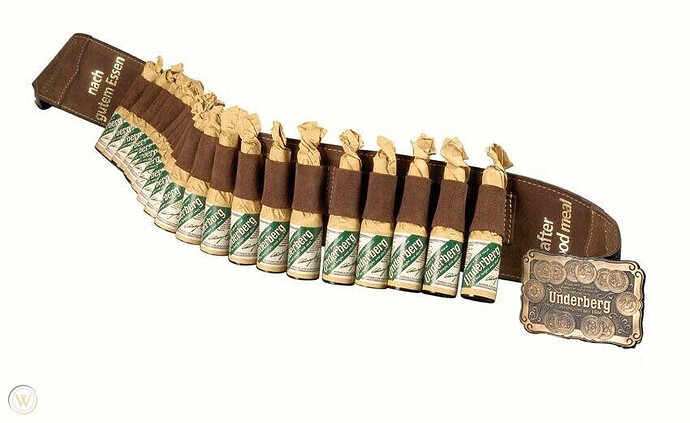 They still have that in the US in bars.

They still have similar in the UK. I was in a pub in London with German mate. He spotted the bottles and I explained they were popular with the yoof. He then said, “But they are for old people,” and couldn’t stop laughing.

They used to be a hang over/stomach ache cure when I lived in Germany, it settled your head/belly or made you sick!