This one looks tricky. Looks like on a larger level there are only three administrative regions, but then there are 58 provinces + 5 municipalities.

Officially, Vietnam is divided into 3 administrative tiers, with different types of administrative unit on each tier: A Fourth Tier also exists as Hamlet (xóm, ấp) and Village (làng, thôn, bản). However this is not an official tier. On the First Tier, there are 5 municipalities and 58 provinces Municipalities are subdivided into: District-level city (Municipal city), Urban District (Borough), District-level town (Town) and District (County). There is no official capital of the municipality but...

Could divide it by the eight sub-regions 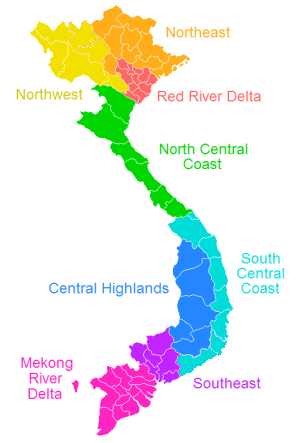