What Ya Drinking Super Bowl Edition

What beers you enjoying today? Who are you rooting for? Make any good appetizers?

I have other beers as well but I like trying to get brews from nearby the teams playing. El Segundo is like 20 minutes from Rams Stadium, Jackie Os is from other side of Ohio but best I could do.

I have no allegiance to either team (or any American sports team apart from Temecula (Soccer) Football Club), so don’t care who wins.

I was hoping to have a few beers from both California and Ohio today, but my Secret Santa has failed to deliver as yet!

I also don’t care about who wins just rooting for certain scores to win money in super bowl squares doing with friends. Sometimes I’ll make food dishes famous from the areas so it would be Cincy Chilli and some sort of Mexican dish for LA. But didn’t do that this year as those sound like they’d clash far too much.

I had Cincinnati Chili while passing through last year. It actually is quite good

That looks interesting, my daughter and son-in-law have planned some weird stuff, but I think it’s mostly been bought in (it’s the Californian way). I’ve been banned from looking in the food fridge, luckily the beer fridge isn’t out of bounds!

EDIT Bit: Just Googled Cincinnati Chili, sounds too sweet for me, but I would certainly try it if in that area.

Why do the Bengals say Who Dey? 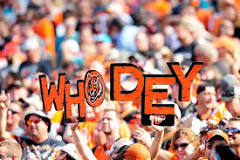 Over time, Hudepohl was sold in the stadium by beer vendors during games. Walking up and down aisles, vendors could be heard shouting, “Hudy,” short for Hudepohl, which sounds a lot like “HuDey,” or “Who Dey.”

but I’m drinken this right now

Hi, It’s 86 degrees outside and I am 20 miles or so South of the Super Bowl (it’s 23 degrees in Cincinnati). Back in Shropshire in March!

Just having my fourth pre-kick off drink: https://www.ratebeer.com/beer/henry-hotspur-s-hard-pressed-for-cider-crantree-cranberry-cider/877614/

Getting into the Groove with these:

Ha we made little hot dogs in crescent rolls too

Joe Burrow is from that side of the state.

Shit he went to high school in Athens where Jackie Os is located. This whole thing just rounded into form.

I am aware. I went to college at Ohio University. The first bar I went to was O’hooleys which was the predecessor to Jackie O’s.

I’m heading to Florida in 3 days so getting in groove. Tripping Animals

Well that was fun.

Third Quarter beer was this: https://www.ratebeer.com/beer/brewery-x-citra-loves-nelson/896251/

Fourth Quarter I left California and had this: https://www.ratebeer.com/beer/epic-midnight-munchies-peanut-butter-stout/901082/

Then some Red Wine and Pizza (been snacking all game and prior).