What's Brewing ... to be digital only soon

Just got this reply:-

Thank you for contacting CAMRA.

Whats Brewing will shortly be moving to a digital only platform, however I have arranged for the remaining issues, along with Beer magazine (which is set to feature some content from Whats Brewing after the change) to be sent to you as physical copies going forward.

I can see my membership lapsing if that’s the case.

Will also mean I’ve got to pull out of the Investment Club too; bugger!

Lots of chatter on this, both positive and negative. For some, it’s the only aspect of CAMRA that they have any contact with, so it going means they will too. Do wonder where the campaign is going, has become toothless in recent years. I’m still a member though, and will continue to fritter away my annual membership!

Well I’ll be out.
Vouchers, physical reading & discounted festival tickets were my main buy-in.
All useless now.
I’m full on digital but do enjoy a physical mag or newspaper.

I know one person who has already cancelled their CAMRA direct debit, and I have threatened to do the same. However, my current membership doesn’t run out until December so I have plenty of time to make up my mind.

A massive own goal if you ask me. Branches are always complaining that they never hear from most members, and so head office decides to remove one of the main methods of communication !

Also not happy with how this was decided by wedict from above. I understand the reasons were mainly financial, but I (for one) would have been happy to pay a little extra for a physical copy.

Mind, although i always skimmed through it, there was never much of interest (besides the obligatory letter from Paul mudge !). It was mostly political stuff, and didn’t say what I was really interested in. Beer maagazine was usually much more interesting

It’s happening in May I believe, I shall wait and see how it all pans out; my membership renews in Oct (or maybe it will not).

My renewal comes up in November. I almost cancelled last year but thought I would hang on to see how this year panned out. I am almost certain to cancel this year I reckon. The one thing that could save it is if Beer Festivals re-appear, but I’m having my doubts that they will.

I was on the fence with renewal in December, but when they sent me 3 reminders to pay my renewal within 5 minutes with no real insight as to why I should staying a member, I let my membership lapse.

That said WB has been a bit crap for ages. It seems to represent the CAMRA old guard, with BEER magazine being much more progressive in it’s outlook.

I really enjoy BEER; I hope that doesn’t go online only too. If it does I’d probably end my membership at that point.

On a more positive note GBBF has been pencilled in for August.

Around here most of the local mags have already gone digital so doesn’t seem a surprise that the national one would do so as well. For once CAMRA seem to be keeping up with trends, even if it is the death of physical media.

Due to the ongoing uncertainty of the pandemic, it is with a heavy heart that we have had to make the difficult decision to cancel the in-person 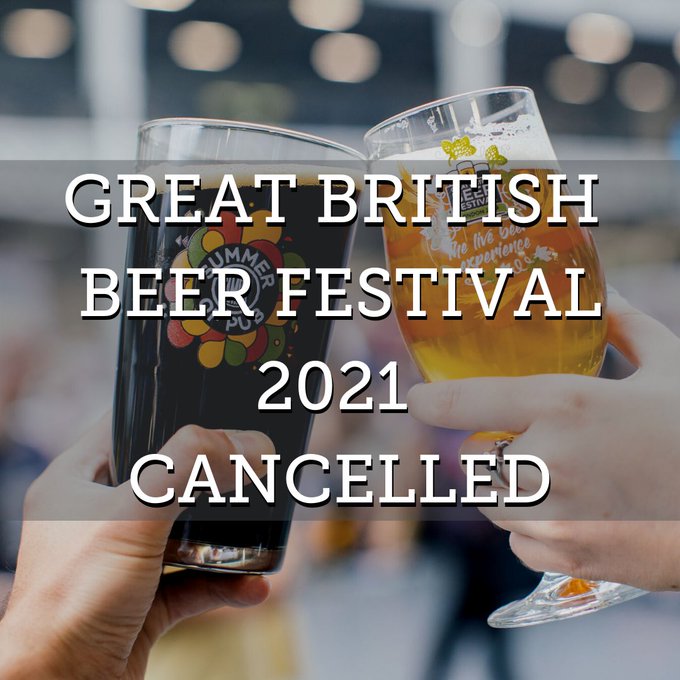 Not a surprise, I guess. Obviously updates in the last two days or so.

Was surprised to see that Craft Beer London, or whatever it’s called, are still selling tickets for their May event.

Was cancelled well over a week ago … Jan 29.

As for that May festival … yeah right !

May have been more than a week ago that I looked at the website then… this is lockdown time.

The last I saw was that BEER mag would continue to be printed.

For me, there’s a huge difference between something that arrives, eg. a mag or even an email, and something I have to (remember to) go and look for, such as a news website or message board. I wouldn’t even be here now if it weren’t for the email reminder!

You can bridge it a bit with something like an RSS newsreader to pick up new stuff on websites you follow, but you still have to think to check the RSS reader.

Surely I’m not that weird in expecting to be able to choose for things to turn up, rather than having to go look for them?

Just landed … all 12 pages of it … the penultimate physical edition it seems !

Mine came this morning, haven’t opened it yet, unlikely to be much of interest in there.

Mine also arrived today. Also not opened yet!

Been reading about the history of CAMRA this afternoon in the brilliant Brew Britannia book. Quite an exhaustively researched book, filling in the gaps in my knowledge considering I was born in 1981, ten years after it’s formation and started drinking 25 years after (Hooch blackcurrant). I find myself with a renewed appreciation for CAMRA given the ‘bearded hippy misfit’ image of some of the founding members. Crazy to think how long Whats Brewing has been coming out, and a little sad to think this is moving to a digital format. Definitely a hugely important document of British drinking culture, hopefully it will continue