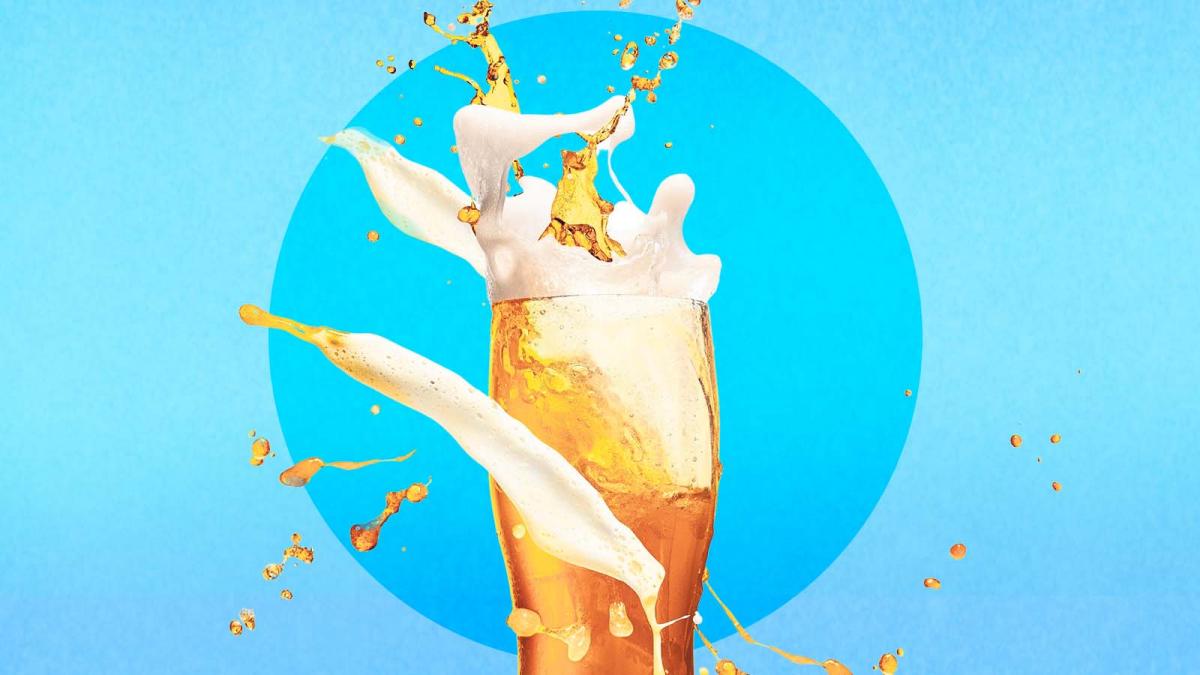 As two more craft brewers go bust, what can microbreweries do to survive?

Booked your Christmas party yet? The British beer and pub industry is crossing its fingers that you will. Soon. December is usually the biggest month of the yea

Article is paywalled so here’s an archived version we can all read: https://archive.ph/Lr8CP

Yeah that’s a big loss, I’m sad to see them go, even though I admittedly don’t drink much of their stuff these days. Some of their beers were incredibly good.

Can’t say I’m all that surprised though. Contrary to the article’s present tense, Wild Beer in fact closed their Cheltenham bar several years ago which seemed rather odd at the time. And after the terrible handling of their crowdfunder (were investors ever told what the brewery did with their money? Because they certainly didn’t expand. It’s beginning to sound like it was all to keep the brewery afloat.) I think a lot of those investors, i.e. some of their biggest fans, lost a huge amount of trust towards them with the lack of transparency there.

Also, I do wonder if their “wildly different” beers were a little too niche to be appreciated in the mainstream (supermarkets)? I know it was a selling point that a lot of us here can appreciate, but the average supermarket beer buyer probably doesn’t.

But yeah, ultimately it’s a real shame it’s come to this. I get the impression the cost of living was simply the final nail in the coffin.

A huge shame and a huge loss. They were amongst the very best at what they did. (Apart from some of the cheap canned beers which were fairly bland).

They were emailing about their brand new special members club quite heavily up until last month, so I’m quite pleased I didn’t sign up!

Wonder what will happen to all those old barrels stacked up in their warehouse. There’s quite a bit there! A friend of mine did some work for them once and said they have no idea about what’s in some of the older barrels.

Is this all speculation at this point? They posted on their Facebook yesterday. I’ve seen nothing actually from Wild Beer and the article said they denied commenting. Surely something to watch and keep an eye out on.

Seems to be some of that but if they’ve got administrators I think it’s just a case of WB not having made a public announcement yet, perhaps waiting to see if a buyer comes forward for the brand as they’ve implied in the article. Definitely strange that they’ve otherwise been active on socials until now.
Also it didn’t say they denied to comment, only that they hadn’t responded. Again, presumably because of the above.

Also just edited my other post as I heard from an investor that they never got their crowdfunding rewards, implying they used the money for other purposes than what was promised.

They were looking to expand onto a new site with new brew kit only a few months ago, so it could be a backer has pulled out…

So concentrating on supermarket beer doesn’t pay off? Oh, well.

Funnily enough I posted it as it came up on a Gluten Free Beer Facebook group, as they’d brought out a Gluten Free option in Bibble but people in the group hadn’t had a chance to try it and now they’d collapsed, so can we now expect domino-like collapse of brewers who haven’t been offering enough Gluten Free beers

Oh, that sucks. Really liked Wild Beer, they were just out of my top ten most-rated breweries. They had some pedestrian stuff sure, but when they were good they were amazing.

I got a keyring bottle opener, which really stabbed your leg if you keep your keys in your trouser pocket. Then it broke.

It is a bummer. When they got it right, Wild Beer could make outstanding beer - some of it niche, some of it just solid drinking beer. I recall once having five pints of cask Bibble (a relatively low ABV, hoppy pale ale) at the Cask Pub & Kitchen in London.

I too didn’t buy much from them in the past couple years, though. Which I suppose says something.

This is of course why some people were also unhappy with Wold Beer: 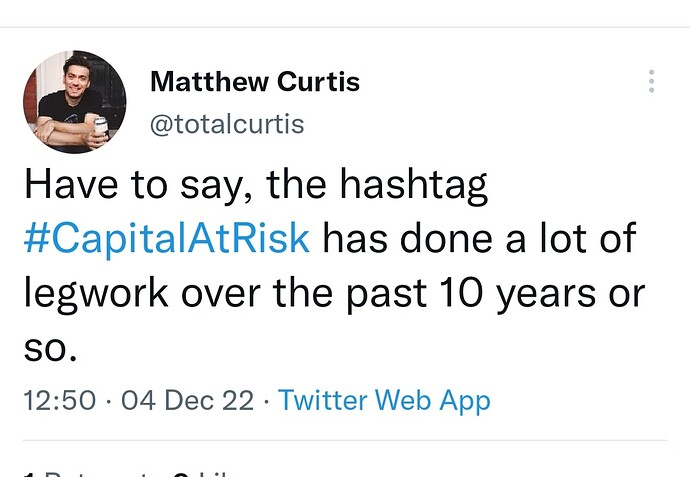 Looks like Twisted Wheel Brew Co have ceased trading too. Difficult times ahead. 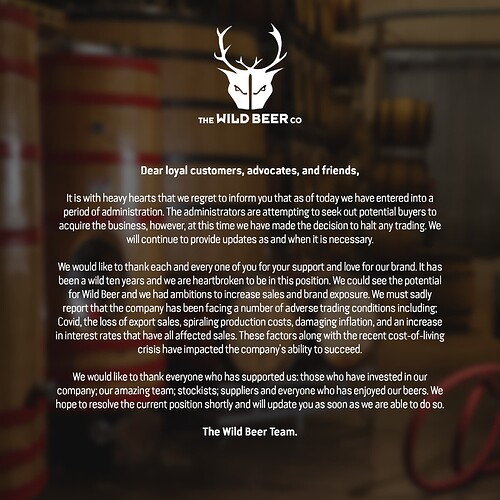 And from Twisted Wheel too: 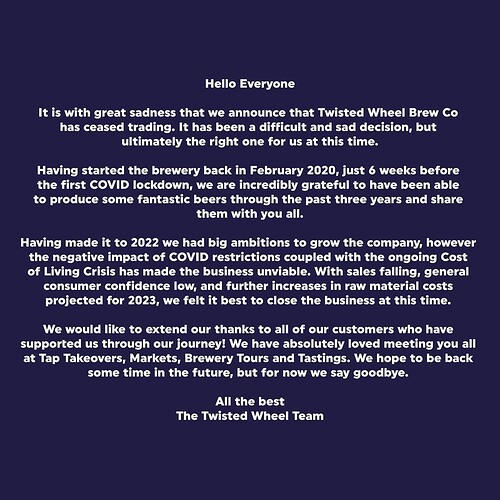 Top Out Brewery – end of year

It would be interesting to do a deep dive into what type of breweries are closing. It’s easy to blame it all on Covid/the economy but is there a specific type of brewery that is at threst. I’m thinking cask led breweries for instance.

Some very good breweries gone there and not forgetting a lot people out of work at a very difficult time. I hope that some of these find their way back in some way, shape or form.

God, what an awful year. We’ve lost two breweries in Leicester (although technically West End is still trading until New Years Eve). I feel so sorry for those affected.

Which other Leicester brewer went ? Not Round Corner was it ?

Framework seemed to have closed. I was not sure if it was official dead in the water but its looking that way. I liked them but boy were they inconsistent.

I am a little surprsied by West End going. They had good footfall, it was in the wrong part of town for a crawl but they had their regulars in an area with few good pubs.