Whilst we’re at it with Wales thought may as well get some advance input for Ireland.

Not sure there are any active Irish forum users.

I can’t see Ireland and Northern Ireland being anything other than a split to the 26 and 6 respective counties.

Provinces way too few and then you would never break down Northern Ireland beyond Ulster.

26 and 6 look good to me, admittedly I have very little knowledge of either country geography wise. Just seems the sensible way to go.

Yep, I’d already had an advance look at the Irelands and come to the same conclusion of 26 and 6.

Norn definitely has breweries in every county, but I wonder if the same is true for Eire?

Possibly not … hoping not … doesn’t always need a full set … when I joined RB Canada didn’t have a brewer in I think 2 of their provinces.

Eire was certainly on a bit of a craft beer boom 2017/18/19 pre lockdown with lots cropping up so who’s to say that a minor county with zero won’t get one in the future?

187 all told including cideries and retired breweries … I remember back in the 90’s when this was a dozen or so !

I’ve looked at them as well and I cannot think of another way. As you say reducing NI takes it to 1, which isn’t right. Eire can be reduced but that doesn’t make it consistent. so 26 / 6 gets my vote.
Ulster actually includes Donegal and Cavan from Eire, so that would really mess us up anyway.

You read my mind, I was going to post this next after we’d finished deciding on Wales.

I’m in agreement with 26 and 6. They’ve been in use for a very long time, all are of a good geographical size. I don’t know if there is a brewery in every one but I don’t think this matters anyway.

Cool, you guys got a list somewhere with these?

map above or google it … not hard to find

The word County should probably remain in each one, or be abbreviated to “Co.”, to distinguish it from cities in addresses that share the name.

Is that really necessary? Is Dublin the city not in Dublin County?

Nobody has ever complained that they are confused that “New York” refers to the region and not the city after all. Ditto Quebec City, Oklahoma City, etc etc. I’m really not sure I follow this argument – seems to be overthinking things here and in the Czech split forum.

Not necessary no, I don’t care either way to be honest. It just seems to be the done thing in Irish addresses from my observations. I do agree it’ll look redundant in the region list though.
Ok apparently it actually is necessary yes, formally they are written this way.

And how does it harm you calling it by its correct and full title ?

Are you an expert in the naming of world regions ?

Chill out. We’re just trying to get things separated here. I don’t really care, it’s just a convention thing for the site. As someone mentioned, we don’t say Commonwealth of Virginia.

We also say La Paz and Cartagena for the cities rather than Nuestra Señora de La Paz and Cartagena de lndias. Clearly the intention of the site there is to spit in the eye of history, and flip off their centuries of culture. Just as clear as I’m sure you respect history deeply yourself every time you tell your friends you just visited a pub in “County Roscommon.”

And definitely we should immediately rename those English counties, right after making off with your daughters and converting you to socialism, for good measure. I’m glad you pointed out these egregious overlookings.

Also keep in mind for England, it says “English counties,” on your profile just as it says “German Bundeslander” and Canadian provinces etc.

Fine … glad you accept the correct titles … no need to comment further … this one is done !

But Kansas City isn’t in Kansas, it’s in Missouri. Confused the hell out of me!

Next up, list of official names for Chinese regions

But Kansas City isn’t in Kansas, it’s in Missouri. Confused the hell out of me!

[Album] Why we dont leave Texas 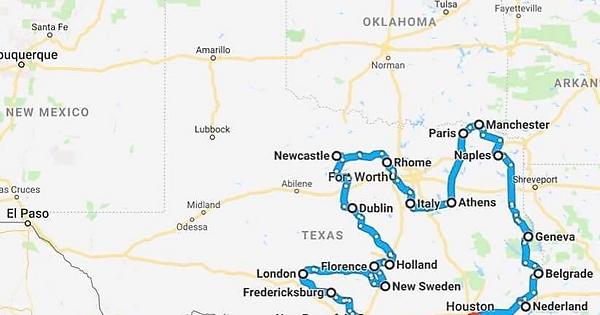 Kansas City, KS is in Kansas if that makes you feel better.