What should be the new beer styles

I was going to build a poll here, but couldn’t think of what to add other than a couple things that we might consider making their own styles in the future. Seems to be a lot of Italian pilsner and Japanese rice lagers popping up in recent days. I’ve been adding the latter as premium lager, but perhaps for now should be in specialty grain?

How about triple IPA/triple hazy IPA? Should we acknowledge those as styles at this point? Any other ideas?

Also not like I’m saying this is actually going to happen as I’m just some guy. Just for the sake of conversation…

I think “Imperial” covers double/triple/quadruple _______. It works for stouts and porters, and all separating them further will do is water down the top 50 of each category IMO.

I think I posed the same thought about triple,quadruple IPA a while back. It was shot down pretty quick. I dig it.

Much as I dislike them, there’s probably enough white stouts, and they’re a distinct enough style to be separated.

If nothing else so that I can avoid them entirely. I remember ordering one once when they were just coming into style and telling the bartender “I think you poured the wrong beer, I ordered a stout…”

Can we have a Pale Lager - Cold IPA style? California Common - Cold IPA might also work.

Actually kentucky common would be a real candidate, seeing more of these, and it doesn’t fit in anywhere else except traditional.

I know there’s a tag, but BA imperial stout might not be flavoured/pastry but it’s usually a damp barrel. It would be nice if just straight imperial stout were a style.

Is it too late to distinguish rustic/ mixed fermentation farmhouse from saison?

I’d personally love if barrel-aged stouts were a category. Like Spirit barrel-aged stout. If we really wanted later they could be split between boozes, but I think whiskey is the main barrel used in like 90% of the time. Only a few rum, gin or tequila barrel-aged beers out there, and most are bad anyway

Sour-Smoothie would be helpful so I can quickly know what to avoid. 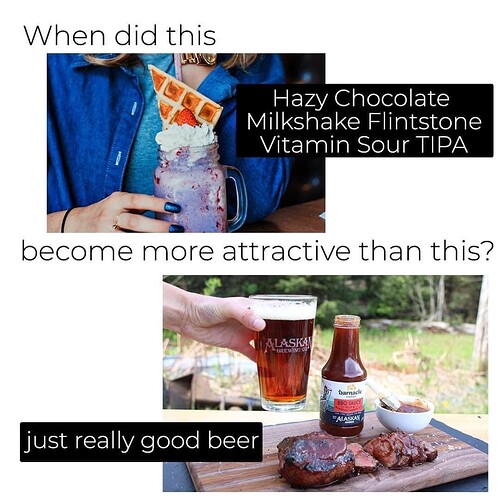 It is kind of tragic that RateBeer, after all these years, has not yet discovered and adopted the easily defineable style “Low carb light / lite lager”. Having this separate would raise the standard of the remaining “Pale lager” category.

raise the standard of the remaining “Pale lager” category.

The heavens are no limit to the heights pale lagers could go without low carb beers holding them down, after all…

It is kind of tragic that RateBeer, after all these years, has not yet discovered and adopted the easily defineable style “Low carb light / lite lager”.

I’d just like to see a ‘flavored’ category for all individual styles. It’s so random now which styles do have a “-flavored” category and which don’t. And almost all beers are flavored nowadays.