I’ve got the GhostWhale one, but it’s in UK and I’m in Italy on business for few more weeks. Will post when I get back I guess as my wife will not open them.

Advent from Hoptimism day three. Apologies for any spoilers.

My 3rd Advent beer is this

It says 2013 on the cork. Oh that’s good. Oh man that’s good. Yes again a little bit of a change in the beer with a few years of age. Delicious lemon sharp sour flavours. Some wheat flavour. Some proper funk on the aroma. Light farmyard. Pretty much delicious. The flavour and finish are impeccable. I would say less sweet than when it’s fresh. Good though. A low 4.x for me.

My 4th Advent beer is this

It says 2008 on the label. Not sure where I bought this. Pours deep deep black beer big lasting tan head. First time I had this I didn’t like it then I understood the next bottle more. So again really interested in seeing what this 10 year old beer is like. It’s a metal cap rather than the cork that used be the seal. Tarry aroma, dark chocolate, like medicinal aroma. Well it’s dark chocolate, tarry, some blackcurrant flavour. Light bitterness on the finish. Light sourness. Like sour molasses. Very smooth in the mouth. Good dark sour fruit on the finish. Black olive flavour. I loved this. So interesting yet so drinkable. 4.4/5 I think . Hey I’m going to re-rate.

Absolutely love the Harvey’s impy - one of my top rated beers of all time.

With nagging from the kids and my request my wife opened first 4 days of GhostWhale beervent calendar.

My 5th Advent calendar beer is

2009 bottle bought from the Struise School with Fin and Loz. Some liquorice, some sourness, some balsamic vinegar, Fairly easy drinking. A mix of Pannepot Reserva liquorice and dark fruits with some Flemish red cherry flavour. Perfect mix of sweetness and sourness. I thought this was lovely to be honest. I know I have a bias towards Struise old school beers but this one is downright gorgeous. Fortunately I have a couple more bottles in the garage. 4.xx something.

My 5th day of advent is:

And I’ve got number six in the fridge at home

Pretty impressive selection for down here, all stuff they cold chain import so far.

My 6th Advent Calender beer is this

75cl bottle bought god knows when, at Struise. 2nd Struise beer in a row. Not surprising really as I had such a great time with these guys from 2005 onwards. It’s a big bottle of 10 per cent goodness for a weekday, but I will give it a go. No idea what to expect. Except this is a 13 year old beer. Metal cap and a cork, could be explosive so opening over the sink.
Well it opened with no fuss at all. It pours beautifully. Clear, no chunks, no floaters. An almost black dark brown rich colour with a lasting tan head.
Aroma is Christmas cake with a little age presence. Malty, dark dried fruity.
Mouthfeel is lovely, soft carbonation. No oxidisation.
This beer has kept well.
Oh boy, glad i’m sat down, this is sheer heaven.
Some baked raisin but some fresh raisin aroma too. Dark plums.
It’s amazing. So fresh so alive. The dark fruits are so fresh so clean it’s like eating a bowl of freshly picked dark skinned plums.
After 21000 beers this is one of the best I’ve ever had.
You know how you keep a beer for a special occasion and you wait and wait and then have it. And it’s flawless.
Even some of the baked apple from the calvados barrel ageing comes through. It’s glorious.
After the disappointment of not making it to the Pig’s Ear beer festival due to family stuff I was a bit depressed but this has lifted my heart.
What a beer.
13 years on and it’s as fresh and as alive as a bowl of fresh plums from the fridge, picked in the morning and eaten in the afternoon.
No hint of alcohol.
It dances, it glides. It is simply one of the best beer experiences I’ve had in my life.
Just a touch of balsamic on the edge maybe. Which just counters the sour plum flavour nicely.
Outstanding.
So glad I have decided to do this Advent thing. It means I get to try some of the beers I have been saving for ages. And they are starting to reward the effort.

Not opened tonight’s beer. Bout looks like it would be good. 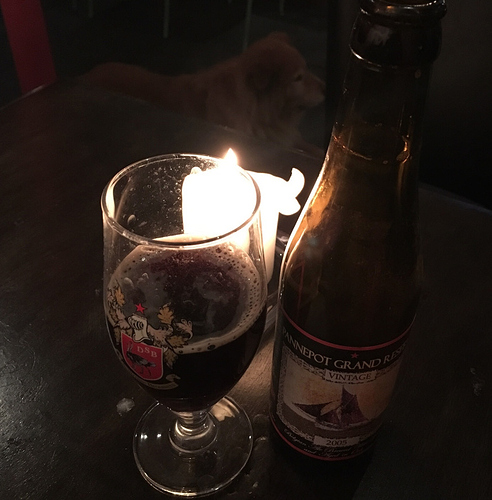 Oh yeah, it was a beer memory I won’t forget in a hurry.

My 7th Advent Calendar beer is this

Bottle number 1969. Not sure of where this comes from. it’s possible it’s a bottle from the shop at Borefts beer festival, but equally it’s possible it’s a bottle from Kent BF which Menno very kindly brought over. I think likely the later so my thanks goes out to Menno and my best wishes for the future to you and glad to see you at Borefts this year… Says bottled on 13 May 2010. The batch was only 2040 bottles in 18cl bottles.
I really am treating myself with these Advent beers.
Opens with a phhhtttt of carbonation. Pours black dark brown with a thin lasting tan head. Some soy sauce on aroma. Some dark chocolate. I really don’t remember the beer the first time round so don’t know what to expect… Opens up a bit more in the mouth with some vanilla from the barrel ageing. Bourbon and Bordeaux apparently. I’ll leave it for a bit and see what happens. Bottle says good for 10 years.
The soy sauce goes after a while. The flavour is dark chocolate, almost minty. Sweet vanilla for sure. Some vinous character. Light red wine flavour develops. Actually the more the beer opens up and oxygenates the better it becomes. 3.7/5.0. Good but not as great as some of the previous bottles. Smooth in mouth and finish. No off flavours, no ageing signs. Soft dark chocolate vanilla and some red wine. The swallow and finish are better than the aroma.