Where should I place this? Or has someone already hid it away somewhere?

JDW Maui Tropical Pale Ale brewed by J D Wetherspoon as an IPA - American style beer, which has 3.6 out of 5, with 751 ratings and reviews on Untappd.

Generally those JDW festival collabs go under the UK host where it’s actually brewed, with the original overseas brewer in the name. So in that case it would go under Banks as Banks / Maui Tropical Pale Ale.

Just about to type the same.

You just needed to look at the beer clip in detail Jeremy in order to ascertain who the UK brewer is.

Add as an APA.

That’s what I thought, but then I noticed it had 254 rates on untappd: thought someone on here might have already added it already.

As my reply above Colin.

Didn’t want to duplicate it.

That’s less than 0.3 rates per sPoons … not that impressive tbh.

I don’t tend to bother with Spoons that often personally so I’m not likely to encounter it.

That’s less than 0.3 rates per sPoons … not that impressive tbh.

I don’t tend to bother with Spoons that often personally so I’m not likely to encounter it.

It was drizzling when we walked past, although to be fair my local one is very nice, just doesn’t change it’s beers as often as it used too.

Beer? But I thought the food offerings were usually satisfactory. Maybe you should drop in once in awhile.

If you like a chef that goes ping maybe !

Spoons breakfast is fine enough and when I have a days drinking in London I often kick off at Wycombe spoons for a full English and if there’s a new beer on cask I’m more than happy to sink a half at 845 am safe in the knowledge someone else in the Falcon will be drinking something stronger at that same time!

a chef that goes ping 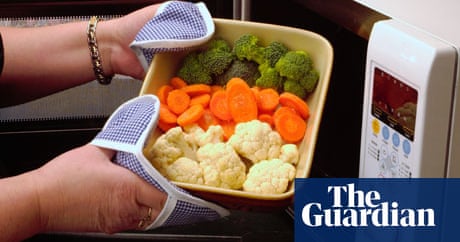 Sultans of ping: microwaves in restaurants

When it comes to microwave ovens, some restaurants are snooty, some secretive and others unashamed. Where do you stand?