Regions of Finland for Splitting

They also have Official English Names 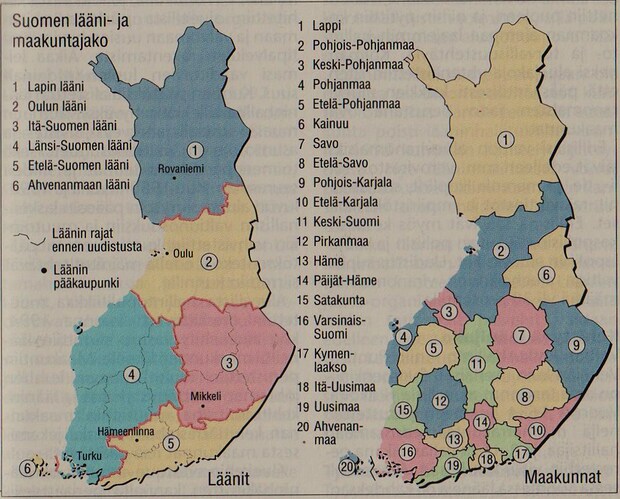 Cool, do these have English names? How should they be written out?

They’re all here under the abolition section, albeit in reverse order to the map vastactiv posted: Provinces of Finland - Wikipedia

From my non-Finnish perspective the 6 länes are probably the way forward. Unless that is there’s a decent number of breweries in each of the smaller regions?

Why not split Finland in 20 regions when it is decided to split Ireland in 26?

Kainuu has only 1 brewery, Åland has 2…

There is big chance coming in Finnish government byrokcrazy and those 20 regions might be gone after couple of years.

Ya, well Northwest Territories just got one recently in Canada and Nunavut still doesn’t have one. Pretty far north and no roads to deliver fresh hops makes things difficult.

Ok cool, I’m sending these ones in then. Work for everyone?

When are you going to get over Ireland being split into 26 counties ???

Every fucken thread on regional splits you bring this up !

What is your knowledge of Ireland and its counties ?

Do you know the history and passion between the counties, in a sporting context as much as anything… forget the size of Ireland … folks are massively proud of their counties and rivalries between them.

Yet you are determined to split Denmark despite the lack of support from most Danes and Danish admin.

What is your agenda ?

You want regional splits … but not splitting smaller countries because YOU don’t think this is correct despite the evidence and input of those in the know ???

Happy to leave this to the Fins to decide how Finland gets split.

But, in terms of splitting Ireland / Northern Ireland into 4 provinces simply would not work because one of those provinces, (Ulster) straddles both Ireland and Northern Ireland. This is complete non starter.

Are there any shortcuts for postal codes in these regions in Finland btw that will make things easier for admins?

No, it doesn’t make it easier. Anyone who will does it, probably types the name of the town to Wikipedia and checks in which region it is.

If they split Finland you’ll have to come back to America for more trades with me to fill my map, haha. Do all 6 create at least one Sahti?FYI I am now in Massachusetts not far from Julios Liquors which I see you rated quite highly.

Yep! I am coming to USA as soon as covid situation is over! Dont know when and where I will go yet… Sahti tick from every Finnish county is huge challenge even for Finnish raters.

On another note, I just found a rare North Carolinian sahti. Haven’t tried it yet, but I’m pretty sure it will be the best North Carolina sahti I’ve ever had

I spent quite a lot on a US Sahti a few months ago, only to discover it was down as a Sour on here.

haha, shit. I don’t know how many times I’ve done that… chased a region/style/etc. only to find it wasn’t what I thought on the site…

Here is nice article about finding Sahti and other nordic farmhouse ales.

How to find sahti, koduõlu, kaimiškas and other traditional farmhouse ales in the Nordic or Baltic countries. A short guide to bars, shops and festivals.