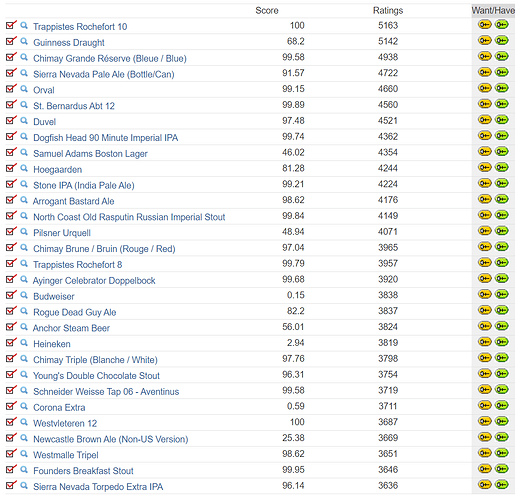 Yes, thanks it @SHIG. I’ve got 49 red ticks but am missing the Founders Breakfast Stout (also on 49).

I hope to find it before I return to the UK.

I would think Founders would be out in Cali.

28/30 my side, missing Stone IPA and the sought after Budweiser…

I think I’ve seen it before @SHIG, in Bev-Mo or similar and assumed I’d had it (wrongly). I have two weeks to track one down.

You need to get on that one!

Ha I’m only missing Budweiser and Heineken. I’ve rated Heineken Brewery in Amsterdam did the fun tour but didn’t rate the main beer. I’ll have to remember next time I’m in free beer situation and these are available. Probably don’t need to trade for.

I’m missing SABL, Pilsner Urquell, Heinekin and Corona Extra and couldn’t care less. I’ve drank plenty of all of them over the years just never rated them. What is the significance of this list? Most rated beers on RB, highest to lowest I presume?

Yes @sloth, it’s the Ratebeer list for the most rated beers. You can play with the page and choose all sorts of different stats, this is just an easy hit to see if you’ve followed the flow or flown your own path.

Each to their own my friend.

I’ve had all the beers on the list though haven’t rated them all. Missing some of the macro stuff, Chimay. Perhaps this year I’ll get around to rating them all!

Interesting to see Westvleteren on that list, often considered or advertised as one of the rarest beers in the world. We all know that’s not the case but I’m still surprised that it’s so high on that list.

Btw, still missing SNPA and Torpedo. Haven’t yet come across a can or bottle that could be considered as fresh, therefore never bothered buying them.

That’s cool. I just can’t believe how low the numbers are. On that UTher site Roche 10 has almost 250K “ratings” right now. It’s not a surprise, I realize we’re nothing compared with them but dayummmmm.