I am being told that I have not rated some random Nicholson’s pub in the middle of London. Why?

An option to dismiss those places it recommends rating would be good - I have no intention of shopping in a liquor store it’d take me over an hour to get to on a bus, especially one without any reviews.

It also tells me I don’t have many friends but when I click on friend suggestions it just returns me to the content feed instead of a page where it recommends friends.

And can you put back the header that was there? I would still like to track who is rating beers for breweries I follow for admin purposes / nosiness and the link to that is now gone.

They are still available from New Releases.

I know. I don’t want to have go through three clicks and a few page loads to get there.

I know, I’m using My Local all the time but it’s not in the new header and I have to load a page with the old header to get it…same with top beers, tags, beer styles…

I don’t care about my friends’ period. I care about what beers they rated, and the activity page used to show what they had rated today. I’m not sure how this update makes Ratebeer more attractive? At least the last many complaints I’ve had were that Ratebeer was becoming more alike to that certain superficial instarater app - this is just a step towards irrelevance unless I misunderstood?

I think the general consensus is that the period over which beers are rolled up should be a day rather than two weeks. I would certainly prefer that.

The feed seems like a page that takes a bit of each Latest pages (New Releases, My Local, Local Activity) but with a less complete, more random experience than each of those pages. As long as the other pages don’t get cut in the process, I don’t mind.
I would prefer if the Brewer pages, Places pages, and a more complete search were the priority though…

Same issue as one or two others mentioned (I didn’t read all responses) - I’m in a pretty small town area. The only locally spotted beers showing up in my feed are ones I rated and added the location for… so yeah… I already know they’re there.

Un. As in unnecessary.

Why. As in why bother doing this.

My. As in MySpace.

The biggest mistake in the new feed is the assumption that I’m following friends. I’m not. I’m following the beers they rate. Now that you’ve taken this away I have less reason to login. This is a beer site, not a friends site. How do you not know this?

But of course, the mistake is mine. This change is not for me, the user. Rather, it is for the true client of the new RB, the business who sells the user the beer.

Honestly, I use ratebeer less than I ever have. I do not drink or explore beer less. Most friends I follow no longer rate. I can’t see how you are building a better site.

No time yet to read all posts, but I want to flush a few items before I forget

The feed seems like a page that takes a bit of each Latest pages (New Releases, My Local, Local Activity) but with a less complete, more random experience than each of those pages. As long as the other pages don’t get cut in the process, I don’t mind.
I would

To my Middle Aged eyes it does feel a bit chaotic, and lacks the simple elegance of the pages that Viper666 mentions above. But then so do many of the Young People Apps I’ve seen.

I do hope though that in the rush to attract new users, us longer term Middle Aged lot aren’t forgotten about.

The fact that updates appear in some random order is really annoying. I.e. I am being shown 4 or 5 newly added beers this morning. I added them on about 2 weeks ago. What benefit is there to showing random old updates. It’s no longer a news feed. This is the shit that pisses people off on Twitter.

I think the general consensus is that the period over which beers are rolled up should be a day rather than two weeks. I would certainly prefer that.

Wouldn’t you much rather see more than one beer in that box, though? If I want to browse throught the feed, I want to see a few of the beers my friends have rated.

I can’t figure out how this is sorted. This

is a legitimate point. I’d much rather see the time AND the additions to my feed chronologically.

This is the shit that pisses people off on Twitter.

Exactly what I thought when I first saw the update. It’s like Twitter when they decided to spice things up and started messing with the feed. I deleted my account with around 1k followers back then. I’ve signed up again two years later to catch the latest in politics, but I just can’t get back into it.

I have the exact same feeling with the feed right now. Little of the relevant information is highlighted and it’s all cramped into these boxes that are essentially a good 50% of white space. Why isn’t at least the number of the rating itself fat so it can be easily seen between those tightly stuck together lines of text? Why does the date have to hang onto the text like it’s glued on? There’s so much blank space on the upper right side. And while it feels cramped AND kinda blank, you have to scroll FOREVER to actually get a little bit of info. The way breweries and people I follow is displayed plays along with this. Why 8/4? Why such a broad column and not add more space to the activity feed?

I think this demonstrates the problem - why would I want to see new beers in random order (especially as I happened to add them all, although that’s a co-incidence): 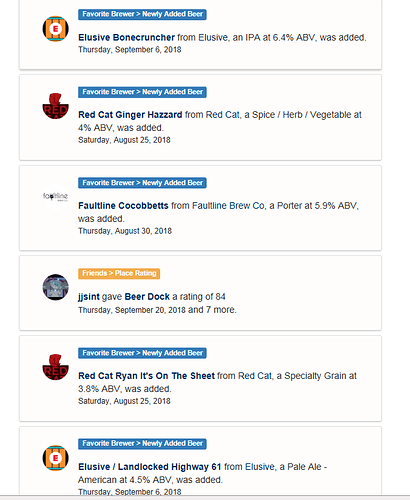 The comments after a recent rating are needless and irritating. For example:

Also, “we notice you have not rated this awful Marstons pub in a council estate 15 miles away. Rate it now!” Is this necessary?

I presumed it’s based on radius - but based on google maps one of the places is circa 60 miles from where I live. Does it factor in where you’ve regularly rated - i.e in my case London. So far I’ve been recommended places in Reading and a few in London. 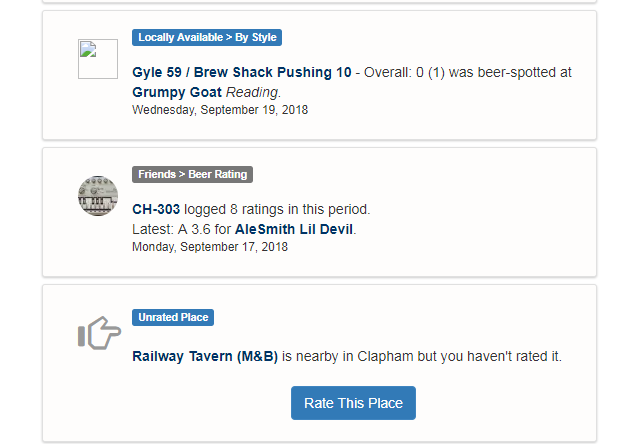 The second thing a developer does after writing Hello World is sorting a list. Yet, E V E R Y S I N G L E time we deploy something, the sorting is messed up. I don’t understand that…

To put things in perspective, a visual comparison between the new feed and an old version

plus all the things already reported about time, beers added by friends, missing friends, “I’m drinking this now”, milestones etc
I understand that some of those are gone because Joe wanted to ditch them, but some provide a valuable sense of community.

Anyway, even if it doesn’t have to be in the feed, as of now I have no way to see which beers were added by a user/friend! 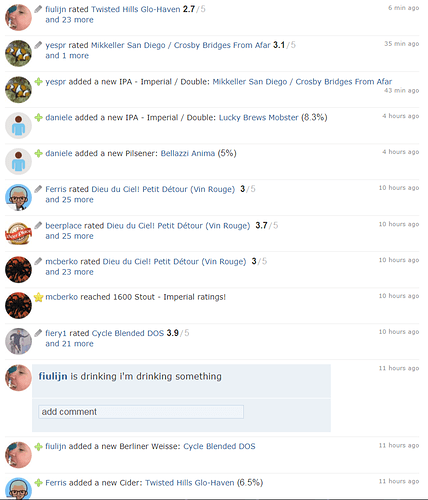 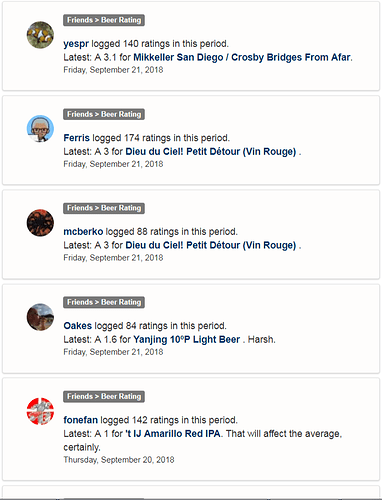